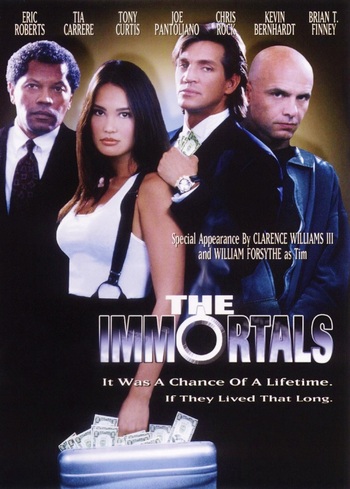 Crooked nightclub owner Jack (Roberts) plots to take mob boss Dominic (Curtis) for millions. To do so, Jack assembles a mismatched group of eight strangers—all of them small time crooks—willing to participate in a complicated and dangerous series of heists. Jack teams them up in unusual pairs (black man and white racist; Ivy Leaguer and simpleton; woman and a sexist; and gay man and homophobe) and sends them out to commit a series of robberies at businesses owned by Dominic. They rendezvous at Jack's nightclub only to find that a double-cross awaits. During an extended standoff in a nightclub, the four pairs of would-be thieves find themselves locked in a bloody gunfight with an unfazed Dominic and his ruthless henchmen.

No connection to the fantasy series of the same name, or the 2011 fantasy film Immortals.