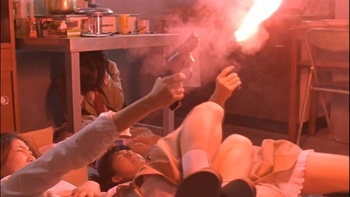 All a powder keg needs is a single spark...
"Oh, well — Plan B. Let's just kill each other."
— Castor Troy, Face/Off
Advertisement:

Someone has just pulled a trigger in an unstable situation where everyone is armed. Everyone freaks out and starts blasting at each other, often wildly and at very close range. For this trope to work right, the outcome has to be truly up for grabs. If someone in a Mexican Standoff starts shooting, this is the expected result.

One possible result of the Powder Keg Crowd. If this happens at the finale of the story, often results in a Bolivian Army Ending.