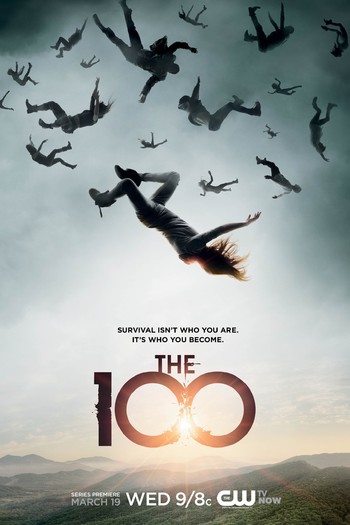 "This is Earth, Clarke. Anything's possible."
"Who we are and who we need to be to survive are two very different things."
— Bellamy Blake
Advertisement:

The 100 is an American Science Fiction series airing on The CW. It is very loosely based on Kass Morgan's novel series of the same name.

The series begins in 2149, 97 years after a nuclear apocalypse devastated Earth. The only survivors were thought to be the inhabitants of twelve national space stations that were in orbit at the time, which have since joined into a single large station called the Ark. On this ship, laws are harsh and resources are dwindling — so the Ark's leaders turn to Earth as a potential solution.

One hundred juvenile delinquents are sent down to Earth in a dropship to see if it is fit for habitation again. Cut off from the Ark due to a landing mishap, the delinquents try to set up camp on the ground. But while the group's eventual leaders — Clarke Griffin (Eliza Taylor), a privileged young woman who was kept in solitary lockup because of the secret her father was killed for knowing, and Bellamy Blake (Bob Morley), a rebellious former guard demoted after the Ark learned about his illegal younger sister Octavia (Marie Avgeropoulos) — find that establishing a functional society comprised of teenagers on an unfamiliar planet is hard enough by itself, there's one other major complication: they aren't the only humans on Earth. The camp quickly comes into conflict with the Grounders, clans of people who also survived the apocalypse, and who aren't happy about the 100 crashlanding onto their territory.

On the Ark, its leadership scrabbles to maintain order. Clarke's mother Abigail (Paige Turco) alternately clashes and cooperates with fellow councilor Marcus Kane (Henry Ian Cusick) and the Ark's leader, Chancellor Thelonius Jaha (Isaiah Washington), as they try to stay on top of the Ark's ever-growing list of problems.

The series premiered in the United States on March 19, 2014 and all seven seasons of the show can currently be streamed on Netflix. It finished its run on September 30, 2020, after seven seasons and (aptly enough) 100 episodes.

There is also a character page and a recap page. Feel free to contribute.

In October 2019, it was reported that The CW was developing a prequel spin-off set 97 years before the start of the series. The cast was announced in February 2020, with the backdoor pilot being aired as part of The 100's final season on July 8, 2020. On November 5, 2021

, it was confirmed that the spin-off was not moving forward.