Only the Knowledgable May Pass 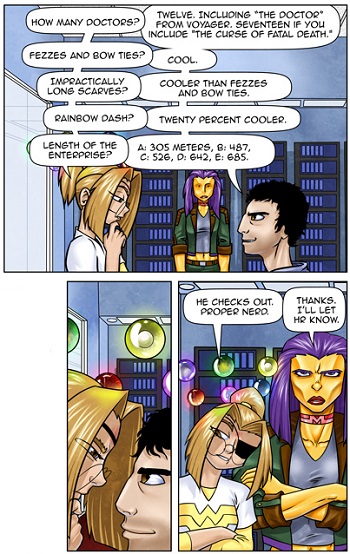 Then, this can mean they want to be rid of you, or exploit you, and there is the little matter of figuring out who would understand if you say it. Heaven help you if you accidentally learned it; you will find yourself knee-deep in trouble before you can blink.

In The Infiltration, it is a frequent point of failure — but if you do have the knowledge, it lets you in entirely. The Ancient Tradition, Ancient Conspiracy, and Ancient Order of Protectors take it very seriously.

Unlike Only Smart People May Pass, you can not figure this one out from the clues; you have to have learned it. (Occasionally, the Genius can manage to figure it out, but it will always take them serious time and effort.) This is, if they did it right. Sometimes they were clumsy. Conversely, an Only Smart People May Pass riddle may turn into this if the answer is too insane or difficult.

Compare Trust Password, Only the Worthy May Pass, Only the Pure of Heart, Only Good People May Pass. If it's something only a specific person would know or say, that's Trust Password or Something Only They Would Say.