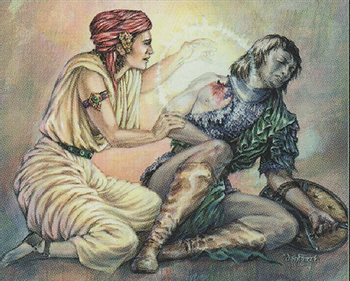 Merryweather: I'd like to turn [Maleficent] into a fat ol'... hop-toad.
Flora: You know our magic doesn't work that way.
Fauna: It can only do good, dear, to bring joy and happiness.
Merryweather: Well, that would make me happy.
— Sleeping Beauty
Advertisement:

Polar opposite of Black Magic. "Holy" powers that the Heroes and Saints use. Probably called this because we tend to think of light as good.

As with Black Magic, there are three factors that determine whether a power is White Magic or not.

As a rule, at least one of these must be positively good, and the other two at least neutral (good is better) to qualify as White Magic.

Unlike with Black Magic, with White Magic you don't have to worry about malevolent side effects. (There may be a sacrifical cost to prove your commitment.) Whereas evil gods tend to despise their human patsies, genuinely good deities tend to genuinely like their devotees. However, with White Magic you do tend to face certain Restrictions, as good gods tend to be pickier about how their servants use the powers granted to them. Crystal Dragon Jesus usually wants his followers to use his powers to go out and help people, and he won't be amused when his devotees run around killing babies.

There are two common methods for imposing Restrictions. One is to limit what sorts of powers the disciples receive to largely beneficial effects that can cause no direct harm; powers of healing, protection, or blessed empowerment. Mature (or merely advanced) devotees might get a handful of spells for offensively weakening and hindering others, though the available "debuffs" tend to be relatively gentle compared to the curses of Black Magic. There may be at least one honestly destructive spell available, but which is only effective against Always Chaotic Evil creatures like The Undead and The Legions of Hell; these spells are called Turn Undead for a reason. Occasionally, there may be exactly one destructive spell that can be used on any and everything — the Holy Hand Grenade.

It should be noted that between the lack of uglifying side-effects of Black Magic and the abundance of healing effects, the followers of Good tend to be much healthier and prettier. (Which may actually serve as a Justification for Beauty Equals Goodness.) Remember, however, that Sacrifice is a virtue. You may be expected to use up your own Life Energy to get the job done.

The other most common Restriction method is requiring the practictioner to abide by a specific code of conduct that stipulates when White Magic should not be used, when it may be used, and when it must be used. This method is most often seen when the brand of White Magic involved features significant firepower. This code may mean contractual technical pacifism, or at least "Thou Shalt Not Murder" (which is distinct from Thou Shalt Not Kill). Perhaps a priest can never take a life at all, or perhaps, like a medical doctor under the Hippocratic Oath, he simply must never use his powers to cause harm. Perhaps a paladin, like a police officer issued a firearm, is allowed (or even obligated) to use deadly force in certain situations in order to save innocent lives, but may have that power revoked if it's misused.

Depressing as it is, sometimes Light Is Not Good, or else just very stupid. In these cases, people are able to use White Magic in all the wrong ways, either by serving as the personal healer of an evil overlord or by marauding around the countryside, using "holy" bolts to slaughter Dark Is Not Evil races like the aforementioned Friendly Neighborhood Vampires and Blizzard-type Orcs. Either the deity behind the White Magic isn't all he's cracked up to be, or the form of magic doesn't involve a sapient source at all.