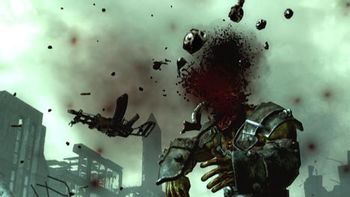 I don't think that a stimpak is going to do him much good now.
Advertisement:

"Any situation that would reduce a character's head to the consistency of chunky salsa dip is fatal, regardless of other rules."

An exception to the Hit Points system common to virtually all role-playing games, in that massive head trauma is automatically lethal to characters regardless of the number of hit points they have. This is a fairly common house rule in many Tabletop Games groups, but a few systems have it explicitly built in, particularly those favoring realism. Games that feature a Combat Resuscitation mechanic may make it so characters downed by a headshot don't get put in the incapacitated state, instead being killed outright without giving teammates a chance to revive them.

The Chunky Salsa Rule may also refer to rules specifically describing the effects of taking much more damage than is required to kill a character, which is to say reducing the entire character to the consistency of chunky salsa. In addition to the grotesque visual, this may also negatively impact attempts to bring the character Back from the Dead. This variation also tends to apply to anything that inflicts such extreme bodily trauma that assigning a damage value to it at all feels like a moot point. For instance, a character who is crushed beneath an object which is several dozen times larger than they are or gets forcibly compressed into a space that is wildly insufficient to contain the mass of their body is practically guaranteed not to survive, no matter how Made of Iron they arenote there's a reason why being crushed by level geometry elements is nigh-invariably an invulnerability-bypassing One-Hit Kill on par with or greater than a Bottomless Pit in terms of lethality in most video games.

The Chunky Salsa Rule exists specifically to avoid Critical Existence Failure. Compare Boom, Headshot!. Contrast From a Single Cell. Please note that this is specifically a gaming trope; non-gaming examples only count if the trope is explicitly referenced or if the work is set in an RPG Mechanics 'Verse. For situations that sound like this in other genres, see Removing the Head or Destroying the Brain or Decapitation Required.