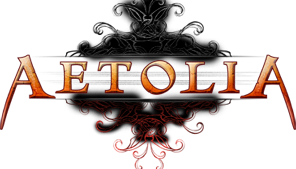 Long version: A 2001 Gothic Fantasy MUD with roots in Achaea, long regarded as a carbon copy with the Our Vampires Are Different Consanguine and some extra skills. Recent developments have started to give the game its own identity, as has the strong community focus on quality roleplay.

Galleus, Aetolia's ex-producer, has stated that the game world will be taking a turn towards the Lovecraftian.

Later, Razmael took over as producer, and under him the overarching story has concerned the Albedi pantheon, a cohort of decidedly eldritch Elder Gods who overshadow the Gods thus far seen in the setting.