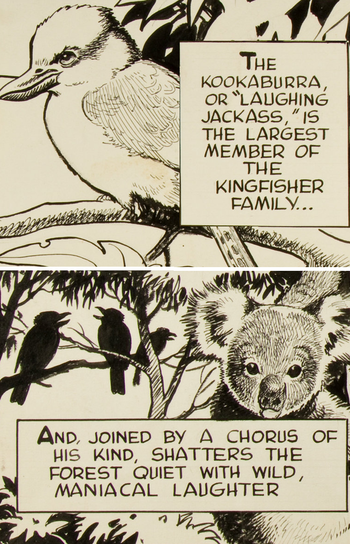 Merry, merry king of the sound catalogue is he.

"In at least one scene in any movie about the "jungle" — no matter where in the world — the soundtrack must feature the demented call ("who-who-who-ah-ah-ah-ah-HA-HA") of an Australian kookaburra."
— Ebert's Bigger Little Movie Glossary
Advertisement:

One of the Stock Sound Effects that pop up whenever films, cartoons or TV series depict a jungle environment with a Noisy Nature is the cackling laugh of the kookaburra, which sounds something like: "OOOOOO-HOOO-OOO-HOO-HOO-AHAHAHAHA"

and is often assumed to be a monkey by people unfamiliar with the bird. It doesn't help much that we typically hear the sound without actually seeing the animal making it, thus adding to the confusion. The laugh sounds great and really puts in the right mood for a mysterious adventure set in an impenetrable jungle.

The thing, though, is that this bird is actually only native to Australia, yet in popular culture you can hear him in every tropical forest from Latin America over Africa to Asia. Still, the kookaburra laugh has become so prominent for scenes taking place in a jungle that creators will still add it to the soundtrack, because somehow it just doesn't sound the same without it.

It should be noted that Australia does have areas of tropical jungle in the northeast (though presumably you don't always hear a kookaburra the moment you enter them). Incidentally, the kookaburra's habitat is not limited to jungles either.

Can also be Played for Laughs, by depicting a regular forest or somebody's backyard at night.

Subtrope of Misplaced Wildlife (unless a story is set in Australia) and Music and Sound Effects.