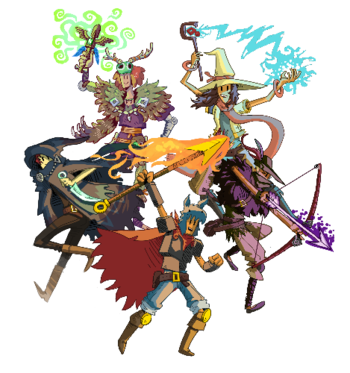 Which will you be?note Clockwise from bottom: Warrior, Assassin, Shaman, Mage, and Archer.
Advertisement:

A type of Game System where a character's abilities are determined by the class that they choose. Most common in Role-Playing Games, but recently it has begun appearing in other genres, particularly First Person Shooters and it's one of the main features of the subgenre Hero Shooter. A character class is defined by the abilities that it lends to a character — as such, two different characters of the same class are theoretically interchangeable, in that they can play the same role in the game because of their similar abilities. However, character class systems have varying levels of Character Customization — ranging from characters of a given class being literally identical to having so much variety that character class is no longer even a good indicator of that character's abilities. Character class systems frequently include one or more Point Build Systems as part of their rules to increase customizability.

One of the major differences between these systems (besides the classes that they offer) is how they handle "multiclassing". Because classes determine a character's abilities, giving a character multiple classes is a good way to expand their abilities, but the extent to which this is possible differs greatly. Sometimes classes are completely mutually exclusive, and a character is stuck with whatever class they have until they die. Sometimes they can "upgrade" their class at a certain point, either plot-based or level-based — this upgrade may be linear (eg, a Squire becomes a Knight) or may allow for a branching path to different Prestige Classes (eg, a Knight can upgrade to The Paladin or a Black Knight, but not both). Some systems are more lenient about multiclassing, allowing characters to change classes whenever they want; however, these systems build in drawbacks as well. Usually, either you can only be one class at a time (eg, if you change classes from Knight to Mage, you lose all Knight abilities and gain all Mage abilities), or you can only advance one class at a time (eg, if you're a Knight/Mage, you have to choose whether to increase your combat skills as a Knight or your casting skills as a Mage; you can't do both at once). Both approaches have the advantage of increased versatility (a larger number of abilities) at the price of decreased potency (each individual ability is less powerful).

In RPGs, the most common type is the Class and Level System. See also Fighter, Mage, Thief for a common set of 3 types of classes seen in RPG class systems. However, many FPSes that feature classes don't have levels, relying instead on player skill. See Common Character Classes for a list of classes that frequently turn up in games with character class systems, and Modern Day & Sci-Fi RPG Class Equivalents for their counterparts outside of the classic Heroic Fantasy settings. See Point Build System for the main alternative to this (although, as mentioned, the two can be combined).

If a character can switch between a large number of classes instead of being limited to just one or several, then you most likely have a Job System on your hands.

Note: Please only list examples that don't fit in any of the aforementioned sub-tropes or that combine two or more of them.