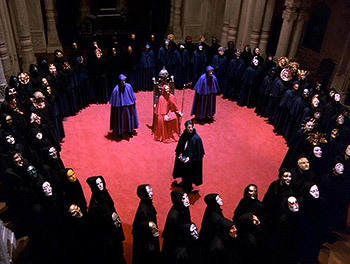 Membership Has Its Privileges
Lindsey: It's a secret society.
Gunn: Never heard of them.
Lindsey: That's 'cause they're secret.
— Angel, "Power Play"
Advertisement:

Let's face it. Secret societies make good villains because you can do almost anything you want with them. If your story needs some hidden group to be the bad guys, you can't go wrong with a shadowy cabal of masked figures chanting Latin or some other long dead language.

The members of such groups meet in the middle of the night, and when they meet are almost always garbed in cloaks that hide their body shape, along with identity-concealing masks. The leader of the cult, of course, will almost always be wearing a much more extravagant, often differently colored cloak (red is a popular option), and his mask is usually more elaborate as well.

Expect black robes, evil magic, Human Sacrifice (especially of the virgin kind, and usually in a painful manner), and dark plots to destroy or conquer the world. Synchronized chanting, bonfires (including the occasional burning cross or wicker-man), odd sexual practices, and blood sacrifice is popular among such groups, but not always necessary. The members of the group itself will be loyal to various degrees. Some will end up being Punch Clock Villains, others in it for the money or murdering, while others will be hardcore true believers.

Don't expect much of a detailed, coherent religious philosophy beyond "serve the God of Evil in return for power (or to keep him from smiting us)," a bit of Pseudo-Nietzschean nihilism, and perhaps a bit of Social Darwinism with special focus on "culling the weak."

A Subtrope of Religion of Evil. May overlap with The Omniscient Council of Vagueness. Often found in works of Religious Horror. Has connections with the Department of Redundancy Department. Often a form of Mystery Cult, Apocalypse Cult or Breeding Cult.