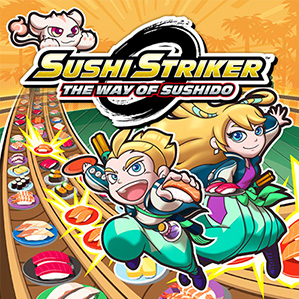 Learn the way of Sushido!
Advertisement:

Once upon a time in the ancient world, there was no natural resource of more value to the world than sushi. Soon a crisis broke out between the Empire that sought to hold and enjoy all of the sushi for themselves, and the Republic that wished to share it with the world. This became known as the bitter Sushi Struggle. After a bloody battle that ended in the Republic's defeat, the Empire outlawed even the talk about or consumption of sushi. However a new battle is about to begin.

The player takes on the role of Musashi, a boy or girl orphaned after losing both of their parents in the bitter Sushi Struggles. After Musashi's first taste of sushi, Musashi agrees to join the Sushi Strikers, a group of Republic members that are ready to use the power of sushi and mystical sushi sprites to overthrow the Empire.

The game is a puzzle game where both players stand on opposite sides of sushi conveyors. After matching plates of like colors, Musashi eats the sushi followed by using the plates to attack the opponent. Each player has three lines of sushi along with one shared line they can both use. The striker also employs the use of Sushi Sprites, magical creatures that can give each player an advantage.

Announced initially as an exclusive for Nintendo 3DS, the game was later confirmed for Nintendo Switch as well and would get a worldwide release on both platforms on June 8, 2018.

Sushi Striker has the following tropes: