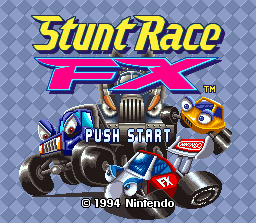 After the release of Star Fox for the Super Nintendo in 1993, Nintendo and Argonaut Software began experimenting on more ways to make use of the 3D capabilities of the Super FX chip. This led to the creation of a 3D-animated racing game, which was eventually released in 1994 as Wild Trax in Japan, and Stunt Race FX in the rest of the world.

Stunt Race FX is most notable for its cast of cartoon-looking googly-eyed Sentient Vehicles: F-Type is a Formula One-like car with high speed and manoeuvrability but poor acceleration and terrible durability, COUPE is a small car with medium overall stats and low boost consumption, 4WD is a very robust monster truck with great off-road capabilities but very poor top speed and steering, 2WD is a two-wheeled vehicle with good to great stats but a tricky balance-based control scheme, and TRAILER is a heavy and tough-to-control semi-truck reserved for bonus stages.

The main game mode, SPEED TRAX, features twelve fully-rendered 3D race tracks spread across three increasingly difficult courses. While the player is pitted against three opponents, they mostly have to worry about completing the course; each race is set to a strict time limit, and the player will be disqualified if the timer reaches zero, if their vehicle sustains too much damage, or if all three opponents cross the finish line before them.

The other game modes are STUNT TRAX, in which the player must burst star-shaped balloons scattered around four tracks filled with ramps and other obstacles in a limited time (plus a fifth unlockable Vehicular Combat track), BATTLE TRAX, which allows up to two players to race each other on four exclusive tracks, and FREE TRAX, a time attack mode in which the player can freely race on any track from the courses they completed in SPEED TRAX mode.

It's been theorized that the cancelled Nintendo 64 game Buggy Boogie

was intended as a sequel to Stunt Race FX, but no definite proof of it has surfaced. F-Type and TRAILER made appearances as Stickers in Super Smash Bros. Brawl and as Spirits in Super Smash Bros. Ultimate. In September 2019, the game was included with the Nintendo Switch Online SNES app, making it the first time it's been made available since its initial release.