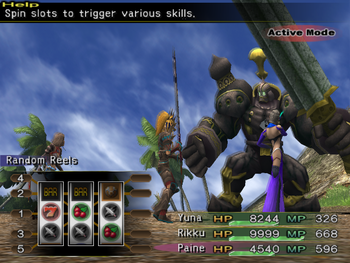 Who do you think would win in this scenario? A giant, living suit of armor wielding an equally giant sword, or a gothic, card-slinging gambler chick who's about to make it rain?
Advertisement:

A character class that plays completely different from any other classes in the game. Either it revolves around a certain mechanic no other classes has access to, or it has a strange power set that makes it fit nowhere precisely in the Fighter, Mage, Thief spectrum. This class is often (though not always) named after some sort of entertainment profession, most often Bard, but Dancer, Mime, and other such unorthodox roles are also possibilities.

What makes the class unique however is the gimmick. Because this class is so centered on their gimmick, and said gimmick tends to put them outside the usual roles, the usefulness of this class can vary wildly, from The Load to Game-Breaker or even Lethal Joke Character. Difficult, but Awesome and Magikarp Power aren't unusual either.

Subtrope of Competitive Balance. Compare and contrast Quirky Bard, where the character class in question is just not enough to support itself. The usual candidate for the "gimmick" part of Balance, Power, Skill, Gimmick.

If a work does not make use of a Character Class System or similar one, then those would belong to Mechanically Unusual Fighter, the Fighting Game brother.