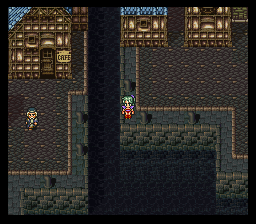 "Hey, where am I?"
"You wanna know where you are? Hahaha! In Port Royal!"
— Intro to "Port Royal" by Running Wild
Advertisement:

Usually coupled with an island and much larger than the First Town, this is usually just where the characters are going to Get on the Boat to the next continent. Otherwise expect a fishing village and a beach, usually with accordions in the soundtrack, perhaps with a floating fish monster that's preventing ships from sailing. If the boat doesn't leave fast enough to get wrecked at sea, the Port Town suffers this fate instead.

Often the Port Town will only let you Get on the Boat after doing a quest, usually as a way to assure the game you're ready to move ahead to an area where you might not be able to backtrack to. If the Port Town is host to an unsavory or criminal subdistrict filled with smugglers, privateers and pirates, this is the Not-So-Safe Harbor.

Truth in Television, of course, but so ubiquitous that trying to list non-video game examples would be futile.

Banga is a mining town set along the floathing Worl Pillar and essentially acts more like a fleet of small ships than a city.

Banga is a mining town set along the floathing Worl Pillar and essentially acts more like a fleet of small ships than a city.