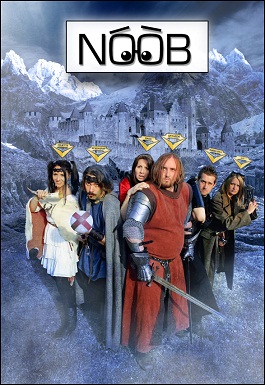 If the guy wearing blue asks you if you want to join his guild, answer "No".
From left to right: Couette, Sparadrap, Gaea, Arthéon, Omega Zell and Ivy.
Advertisement:

Noob started out as a French Web Original in late 2008 and has mutated into a full fledged cross-media franchise by getting its first novel in 2009, its first comic in 2010 and starting the development of a video game the same year. The media, all written by Fabien Fournier, have a Broad Strokes relation to each other, keeping important events in common but varying in the exact way they happened, their connection to each other and/or time periods covered. This franchise has no relation to The Noob aside from also being set in a MMORPG.

The story follows the eponymous Noob Guild, a Ragtag Bunch of Misfits that is the worst guild of a fictional MMORPG named Horizon (nothing to do with the anime) in early installments, then can't get rid of their reputation as such even as they make slow but steady progress. The team is mostly held together by the fact that it's near impossible to reach level 100 without being part of a guild, resulting in both Teeth-Clenched Teamwork and With Friends Like These.... The cast quickly expands beyond the Noob Guild alone as the ambitions held by each of its members make them establish relationships, both good and bad, with other players. These connections, as well as their leader's attention to detail, get the Noob Guild more involved in major game events that one would expect for a low-level guild whose numbers never go beyond seven plus a Honorary True Companion.

Several cycles are planned. The first one, whose plot starts with Noob's recruitment of Gaea, consists of:

The events seen in the different media are organised into the following rough chronological order:

The second cycle consists of three movies financed by a crowdfunding campaign that ran from May 2013 to July 2013 that made 19 times its original goal.

A third cycle is covered in the form of webseries named Noob Rush. It takes place after La croisée des destins, but got its early episodes released before it due to being much less in need of special effects. The main characters from before get Demoted to Extra while secondary characters get a little more focus.

Several spin-offs are planned. Three of them have been released in some form:

The franchise has a character sheet, a recap page and an official wiki (in French ''and'' under construction)

that gets checked by by the author from time to time. For another work by the same creator, see WarpZone Project.

Tropes present in several media include:

Go here for tropes exclusive to the webseries

Go here for tropes exclusive to the novels

Go here for tropes exclusive to the comics

Go here for tropes exclusive to the first movie

Go here for tropes exclusive to the second movie

Go here for tropes exclusive to the third movie