Most Gamers Are Male 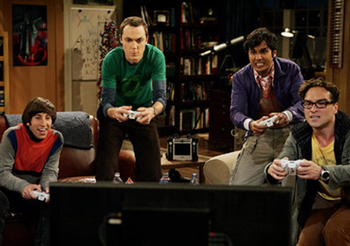 Guy 1: I-I only play it for the fighting. I-I appreciate the expansive multi-tier environment, and the sixteen characters...the pixel-shaded bump-mapping...and the rich plot development. Seriously, why else would I play it?
Guy 2: She kicks high.
— From the Fanservice-filled Dead or Alive 3 commercial for the Xbox
Advertisement:

This trope holds that the primary demographic for video games is males ages 15 to 25, which explains why games are full of Fanservice targeted towards heterosexual males, especially in the form of Stripperiffic female characters, gratuitous violence, and concepts that are oriented more to explosions and racking up a high body count than plot or character development.

There is a lot of historical context behind this trope. Young males traditionally made up the vast majority of gamers, though demographics are changing. Females now make up to 45% of people playing video gamesnote genre and platform irrelevant, these are just raw numbers and the average age of people playing video games continues to rise. However, the core audience for games such as shooters, racing games and action RPGS remains males aged 20 to 35. Those types of games are usually the first types of games associated with gamers. This is likely due to the popularity and controversy of video games such as Call of Duty and Grand Theft Auto which have made them well known even among non-gamers. There is an increasing number of females playing these types of games, but the player base remains mostly male.

It is worth noting that this trope is very much Truth in Television for the vast majority of games considered the territory of so-called "gamers." Females are overrepresented among players of simple freeware or mobile games