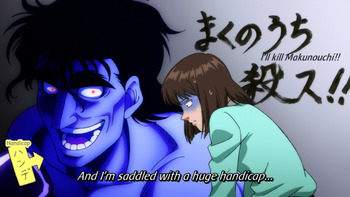 Good luck trying to date her with a brother like that.
Advertisement:

There's an attractive girl who is generally nice, helpful and pleasant to be around. Her brother, however, is a whole other story: he's got the menacing aura around him. He may be a Perpetual Frowner, or easily irritable, or even have the Face of a Thug (or be actually ugly, up to Gonk levels). People would likely hesitate to talk to him, or to his sister when he's around.

The brother here is usually the older one, but rarely you may find a menacing younger brother. In many cases, he's fiercely protective towards his beautiful sister; occasionally, however, he may be a Big Brother Bully instead.

Sister Trope of Ugly Guy, Hot Wife, which is the couple version of this (and probably the reason why they got children as this). Related to Beast and Beauty and both Men Are Tough and Women Are Delicate. See also both Big Brother Instinct and Little Sister Heroine, and The Ugly Guy's Hot Daughter which applies to father and daughter instead of brother and sister. See also Sibling Yin-Yang.

Despite the name, this shouldn't be confused with Bizarre Sexual Dimorphism (but may be related in some way.)