Most Writers Are Male 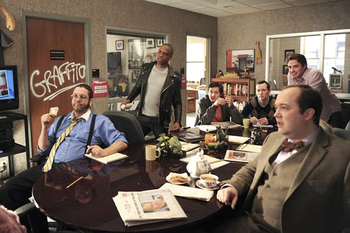 Elaine: (after reading Jerry's pilot based on his life) I'm not even in here!
Jerry: (awkwardly) Yeah, I know.
Elaine: I thought there was going to be a character named Elaine Benes.
Jerry: Well, there were too many people in the room, we couldn't keep track of everybody.
Elaine: You couldn't keep track of everybody?
Jerry: Well, we tried. We couldn't. We didn't know how to... we couldn't write for a woman. We didn't know what you would say. Even right now, I know you're about to say something, I have no idea what it is!
Elaine: You have no idea?
Jerry: ... Something derogatory?
— Seinfeld, "The Shoes"
Advertisement:

Count the number of women in the Producers section, and you'll see that television is still a very male-dominated industry. The Writer's Guild of America (West) claims that only 27 percent of film writers and 19 percent of television writers it represents are female.

Naturally, this results in the male voice being more greatly represented in media than the female voice, and the audience respectively will be assumed primarily male. Main character ensembles will typically be composed of primarily males, maybe with a Token Girl thrown in on the side. Due to people usually understanding their own sex better than the other, said girl tends to be based on relatively stereotypical notions. Thus, The Chick is a prevalent character type. Being unable to develop characters of a different sex as well as characters whose sex matches the writers', many times the female characters end up being either Flat Characters, Hysterical Women, Damsel in Distress types, or Tomboys. This also explains the presence of characterisation tropes such as Lineage Comes from the Father or Never a Self-Made Woman.

A major effect of having male writers in greater proportion than female writers is that Fanservice tends to be skewed towards the male audience. Female character(s) are more likely to appear in Stripperiffic gear and have large breasts (even when it sharply bends Willing Suspension of Disbelief) than male characters are to receive a Shirtless Scene—and even when men do, it's more often a male-perspective power fantasy than the result of actual objectification by women. Many times, the Token Girl will be used primarily as an intentional Ms. Fanservice, while Mr. Fanservice is rarer and tends to be less blatant. When a man has the power to get some of the most beautiful women on the planet to pole dance, he generally tends to use it.

Of course, for skilled writers, their sex will not affect their ability to write a cast with well-developed female characters as well as male characters, or appeal to a female demographic. They will write their female characters as actual people rather than including them because they have to or to make an point about girl power, and while Fanservice may not necessarily be absent, it tends to be more realistic and appealing to both sexes.

Outside of fiction, 'recognizable examples' also tend to be written with (heterosexual) men in mind. (You know, like that time that hot cheerleader didn't want to go to the prom with you.) This is especially common on geeky websites, though there are inversions.

Around the world, men have barred women from entering the creative industries or even employment in general, and most of the world's illiterate population remain female. Historically, many women writers have gone as far as to adopt a masculine Pen Name—a Moustache de Plume—in the hope (or their publishers' insistence) that this will make them more marketable, especially in traditionally "male-oriented" genres—which unfortunately feeds back into the cultural perception of this trope's universality.

Note that this is not in effect in traditionally "girly" genres such as the Romance Novel, where male writers have been known to take female pen names. The effect here is to say, "you can have the romance and the silly, frivolous, emotional stuff, but the rest is for the boys." Likewise, this perception is very much inverted when one gets into fanfiction territory—see Most Fanfic Writers Are Girls. Paradoxically, M/M (male/male) romance is largely written by women for women.

One of the major causes of Female Groin Invincibility and Men Are Generic, Women Are Special. Caused by Write What You Know. See also Most Gamers Are Male and Girl-Show Ghetto. Compare Most Writers Are Writers.