Elaine Benes: I think they call it Myanmar now.
J. Peterman: It'll always be Burma to me.
—Seinfeld
Advertisement:

This country is known in English by two names. Firstly, its colonial name, Burma.note "Why'd you say Burma?" "I panicked." Secondly, the name the ruling military government has given it in 1989, Myanmar. The renaming is understandable, because "Burma" led to confusion as the country is made up of one large ethnic group called the Burmans (or Bamar) and a huge number of smaller ones, who are collectively called Burmese; Myanmar is a more neutral term. However sensible the renaming, a lot of media outlets and governments continue to use "Burma" as a symbolic protest against the military dictatorship that ruled it from 1962 to 2010. The BBC now calls it "Myanmar"

, but note that the very first paragraph also refers to it as Burma. Basically, it's Asia's version of Britain Versus the UK, or the Derry/Londonderry name dispute in Northern Ireland.

From 1992 to 2010 Burma was a military junta ruled by General Than Shwe, who pursued a largely isolationist foreign policy, with the exception of friendly relations with the People's Republic of China.

In 2010, the junta stepped down, and handed power to a civilian government after flawed elections. However, the military continues to have strong ties with the government. Thein Sein (pronounced "Tane Sane") is the former president, famous for his democratic reforms and reconciliation with the west.

There is great controversy over the government's brutal treatment of various minorities, such as the native Karen. Burma has been involved in a civil war since 1948, the oldest ongoing war in the world. They moved their capital from Rangoon to a purpose built city, Naypyidaw, in 2005, ostensibly because of a prophecy that Burma would be conquered by a foreign invader from the sea, but more likely because it could be designed to make urban insurgency very hard, unlike the sprawling Rangoon. Today, Naypyidaw is the capital, while Rangoon, now named Yangon, is the largest city.

In fiction, it is generally a nasty Holiday in Cambodia, portrayed as ruled by an oppressive and genocidal military junta with little regard for human rights or for political dissidents. Then again, in a place where using a modem without permission carried a 15-year prison term under the junta's regime...

The country is big; at 676,578 km (261,227 sq mi)note just a tad smaller than Texas, it's the second-largest nation in Southeast Asia (after Indonesia, which is just plain gigantic, even if most of it is water). While the southern half consists of fertile plains and lowlands as in typical of other parts of Southeast Asia, the northern half is littered with hills and mountains, one of which is a part of the Himalayan Range, which means that it has an alpine climate in contrast to the tropics of the lowlands. The highest mountain of Southeast Asia, Hkakabo Razi, is located in the far north, in the border with China.

As an Indochinese country, this place exemplifies influences from both countries: it is predominantly Theravada Buddhist and writes with the Indic Burmese script, but the national language of the country is Burmese, a Sino-Tibetan language (though the language is far removed from either that the similarities are hard to spot). Burmese is the indigenous language of the Bamars, who make up 70% of the population. The remaining 30% is made up of a hodgepodge of other minority ethnic groups including Tai, Mon, Shan, Karen, Kachin, Indian, Kayan, Chinese, etc...that are severely discriminated by the government, which is disproportionately made of Bamars.

In fact, the country has recently come under fire for indulging in what can be best described as genocide on the Rohingya

, an Indo-Aryan ethnic group who are closely related to the Bengalis and actually live near the border with Bangladesh, which makes it seem as if they are Bangladeshis who crossed the border. This last fact is greatly used by the Bamars to make people think that they are illegal immigrants and thus non-entities. In truth, the Rohingyas are recent settlers...that arrived in the 19th century as part of the demand for work when the British conquered the country. Stating that they're non-entities is akin to saying that the Israelis are non-entities because most of them only arrived in the late 1940s. Nevertheless, they are harshly persecuted in everything from politics, economy, and even religion (the fact that they're either Muslims or Hindu is an oft-stated easy target) that analysts have described them as "the most unwanted people in the whole world."

As of April 2021, the country is in the middle of a major internal conflict. On the morning of 1 February 2021, after the National League for Democracy (NLD) won 396 out of 476 seats in parliament in the 2020 Myanmar general election—which was a bigger margin of victory than in 2015—the Tatmadaw (the name of the country's military), claiming without evidence that the votes were fraudulent, overthrew the government in a coup d'état,

detaining and disposing president Win Myint and state counsellor Aung San Suu Kyi, disposing twenty-four other ministers and deputies, establishing Commander-in-Chief of Defence Services Min Aung Hlaing as the country's new leader. They declared the results of the election invalid and a year-long state of emergency was put in place, stating that new elections would be held after the state of emergency ends even though most of the country's citizens were satisfied with the previous election's results. Needless to say, most of Myanmar's citizens were not willing to go back to military rule. Massive country-wide protests

followed and are currently ongoing; while the protesters have been largely peaceful and nonviolent, the military has responded violently, killing over 500 civilians, including children, and detaining over 2,500 more.

Appearances by this country and its inhabitants in fiction: 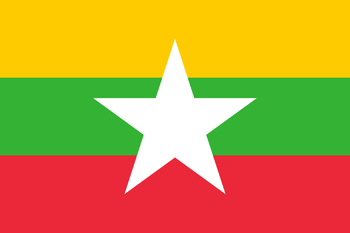 In 2010, as part of the nation's makeover, the old flag (featuring a red field with a canton showing a cogwheel and crops surrounded by stars) is replaced with a flag composed of yellow, green and red stripes, symbolizing solidarity, peace and courage, respectively, while retaining the star of the Union of Myanmar.
State Seal of Myanmar 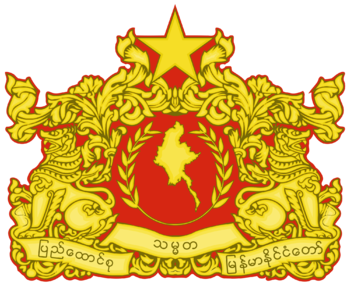