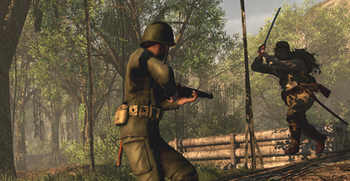 The Jungle doesn't take anyone's side.
"Status report? The last few months on Okinawa have taken their toll. Morale is low. It's the rain sir...and the mud. Tanks are getting bogged down...Supplies aren't getting through...We can't even get the wounded out...Yes sir, understood..."
— Sgt. Roebuck, Call of Duty: World at War
Advertisement:

So you have a Hungry Jungle. And then you have soldiers, guerillas, insurgents, etc. trekking through it. Suddenly, all hell breaks loose as two or more factions struggle against dwindling supplies, scarce food, the enemy at every corner, the elements, and of course, the jungle itself. Jungle Warfare is what it says, fighting that takes place in a remote jungle or lush tropical rainforest, usually on a remote island or somewhere far away from civilization. When there are civilians, they're usually confined to a small village, usually near a river.

In these kinds of situations, expect elite troops, usually those specialized or experienced in trekking through remote and hostile environments, sending patrols deep into remote enemy territory, rebels or enemy soldiers planting different kinds of booby traps, and communication and supply problems. If tanks are involved, expect them to be bogged down in mud during a monsoon, knocked out by anti-tank traps, or simply unable to plow through thick vegetation. Expect a mix of Scenery Porn and Scenery Gorn, depending on how bad the surrounding vegetation is removed, and with it the use of Flamethrowers or other forms of flame-based weapons. Often involves soldiers wearing camouflage over their uniforms either moving slowly through the jungle or waiting in ambush, as well as men, guns, or vehicles concealed by trees.

Much like Urban Warfare, Jungle Warfare can be a nightmare for any advancing army that doesen't have a firm grasp of the place. Even untrained militamen or under-equipped soldiers with a vast knowledge of the jungle can wreak havoc on even the most experienced and trained of soldiers venturing in. Unlike the former, the jungle itself can also be as much of a hazard on both friendly and enemy forces. Among these hazards include diseases like malaria and dysentery, local flora and fauna, and even the mere vastness of the jungle itself, where patrols can get lost simply from making a wrong turn in.

In Real Life, it's usually associated with The Vietnam War, as well as World War II's Pacific and China-Burma-India Theater, where such fighting was all too common.

Compare and contrast with the aforementioned Urban Warfare, Winter Warfare, and Desert Warfare where fighting takes place in cities/towns, in cold, snowy conditions, and in scorching deserts, respectively, though there have been cases where this trope can overlap with the former (Manila during World War II and Hue City during The Vietnam War, for example). Thanks to the climate, a Battle in the Rain is expected almost half the time. And more often than not, this can also easily overlap with Tropical Island Adventure, as a lot of untouched jungles are located on remote islands, and a lot of times the belligerent factions will have to deal with actually trekking through the jungles as well as fighting the enemy.

In this scene, Leckie manages to ambush a four-man Japanese patrol while acting as the rear guard for his unit. Typical of jungle warfare, the actual fighting is just half the battle, with trekking through the dense vegetation being just as difficult of a challenge.

In this scene, Leckie manages to ambush a four-man Japanese patrol while acting as the rear guard for his unit. Typical of jungle warfare, the actual fighting is just half the battle, with trekking through the dense vegetation being just as difficult of a challenge.