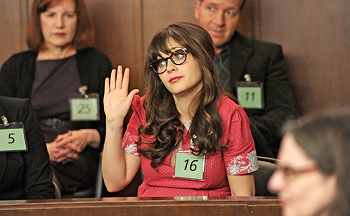 "Sitting downtown, in air-conditioning, judging people all day, with your lunches paid for? That's the life..."
— Stanley Hudson, The Office (US)
Advertisement:

Exactly What It Says on the Tin: A given episode or story arc that involves one of the characters facing jury duty.

He may either look for ways to wriggle out of it, or do the civic thing and attend the trial. Or both, of course. If, in the course of the deliberation, he actually goes against consensus opinion on what the verdict should be, he may become a Rogue Juror. If played for comedy, the character may learn about jury sequestration and try to milk as much out of it by prolonging the jury deliberations. (In reality, jurors are rarely sequestered in hotels and when they are, they're usually the cheapest around. Government money and all that.)

If one of the jurors on jury duty has been bribed or is a ringer, it's Jury and Witness Tampering.

One part of jury duty that rarely makes it into fiction is that quite often more jury pools are summoned to court on a given day than there are actual jury trials that will be held. It's entirely possible for a person summoned to jury duty to just sit around in a waiting room for several hours (bring a book), at which point a bailiff tells them that they aren't needed and can go home now. Of course, being summoned for jury duty without even getting considered for being on an actual jury makes for a very dull and pointless story.