Film / Revenge of the Sith 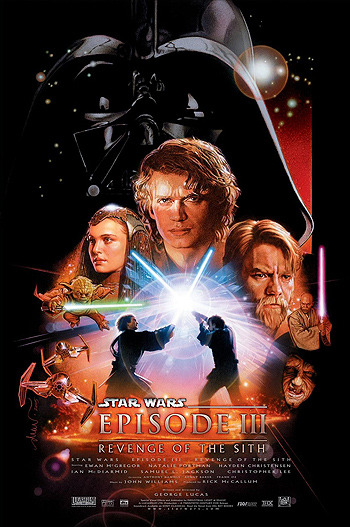 Obi-Wan Kenobi: You were the Chosen One! It was said that you would destroy the Sith, not join them! Bring balance to the Force, not leave it in darkness!
War! The Republic is crumbling
under attacks by the ruthless
Sith Lord, Count Dooku.
There are heroes on both sides.
Evil is everywhere.

In a stunning move, the
fiendish droid leader, General
Grievous, has swept into the
Republic capital and kidnapped
Chancellor Palpatine, leader of
the Galactic Senate.

As the Separatist Droid Army
attempts to flee the besieged
capital with their valuable
hostage, two Jedi Knights lead a
desperate mission to rescue the
captive Chancellor....
Advertisement:

Three years after the Battle of Geonosis and the beginning of the Clone Wars, the Galactic Republic has destabilized the Separatist forces and gained the upper hand. As Obi-Wan Kenobi (Ewan McGregor) heads off to end the war once and for all, Anakin Skywalker (Hayden Christensen) struggles between the Light and the Dark Side of the Force when he fears that his beloved Padmé Amidala (Natalie Portman) is in danger, with his choices putting the fate of the war and the greater galaxy at risk.

An animated television series, The Clone Wars, focuses on the events between Attack of the Clones and this film; the final arc of that series, as well as the first episode of its sequel The Bad Batch, take place concurrently with the film. The film's story is chronologically followed by The Bad Batch, Solo, Obi-Wan Kenobi, Rebels, Rogue One and A New Hope. It is followed in production order by The Force Awakens.

Revenge of the Sith contains particular-to-this-film examples of the following tropes: