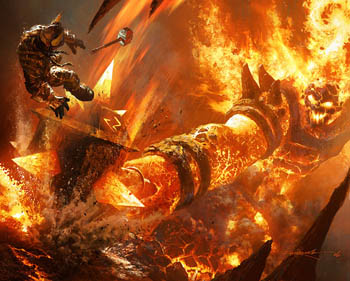 One way to make an artifact, weapon, or situation even better is to get lava involved somehow. After all, if something is already pretty awesome on its own, that said something would be really freakin' awesome if it happens to be using burning magma in the process. It doesn't matter if the lava is even relevant; just the inclusion of a flowing fiery-orange flow is enough to invoke the sense of raw power — strong enough to melt MOUNTAINS! — barely held in check.

Broadly speaking, this trope covers instances where lava or magma is added to something just to make it better.

And to be clear: Magma refers to the material while it's still underground and not yet erupted from a volcano. Lava is the stuff when it's above ground.