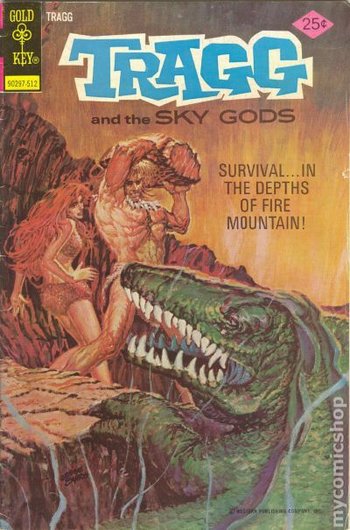 Not pictured: the Sky Gods.
Advertisement:

Tragg and the Sky Gods was a comic book title published by Gold Key Comics in the mid-1970s. The series was created by writer Donald F. Glut and artist Jesse Santos. Later, artist Dan Spiegle would work on the title.

The book told of a group of advanced aliens called the Yargonians who landed on Earth in the distant past and experimented on the Neanderthals they found there. They captured a pair of young women and altered their DNA, so that there children would be an evolutionary jump: representing a new species of humanity. The Yargonians then left, resolving to check back a generation later to see what they'd wrought.

The Yargonians who returned on schedule. However, in the interim, there had been a revolution, and these Yargonians represented an expansionist, exploitive regime that sought to conquer Earth and enslave the locals with their mesmegas, i.e. hand-held mind-control devices. Fortunately the now-grown children of their experimental subjects, Tragg (the hero) and Lorn (the love interest), the first modern humans, were there to oppose their evil plans.

Tragg and the Sky Gods contains examples of: