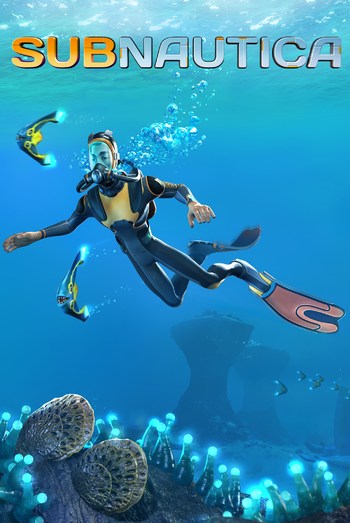 Descend into the depths!
"This is the first time I've seen sunlight in months. After all that time in the deep I'd been dreaming of it. Now that I'm back here, I'm finding it hard to enjoy alone..."
— Bart Torgal
Advertisement:

Subnautica is an open-world Science Fiction survival game developed by Unknown Worlds Entertainment, creators of the well-received Half-Life mod Natural Selection and its sequel. Having spent almost four years in Early Access, and with its V1.0 deadline pushed back five times - from September 2016 to January 2017, then to February 2017, then to May 2017, once more to September 2017, and finally to 2018 - the game has fully launched on PC as of January 23, 2018. It receives one stable update per month and regular small updates for people who play in experimental mode. The game is available for the PC, Xbox One, Mac, PS4 and Nintendo Switch.

The game is set on an alien ocean world, designated Planet 4546B. The player is the sole survivor of a crashed capital-class ship named the Aurora. The lifepod with which you escaped the Aurora's destruction is equipped with a fabricator, which you must use to cook fish, disinfect water, craft tools, and more. You must explore the underwater landscape of Planet 4546B to find resources and blueprints, build seabases and vehicles, and discover just why the Aurora crashed in the first place, all the while trying to survive the dangers of the deep. All the same, Planet 4546B is filled with strange and beautiful biomes, inhabited by a rich collection of creatures that are no less fascinating than they are dangerous.

It can be described as a Survival Sandbox game: you arrive on the planet with nothing and must explore the environment, gather resources, and supply your fabricator with these resources for Item Crafting. Instead of a procedurally-generated world, this game distinguishes itself with a beautifully-crafted setting that is almost exclusively underwater. This means the player can explore by swimming in any direction, and threats can come from any angle. This also changes the challenges of exploration: instead of wondering "how can I get over there," you will find yourself puzzling "how can I get down there," especially once you recognize that the only to escape this place requires venturing deeper and deeper into the Eldritch Ocean Abyss.

On the way, you will face various Primal Fears: swimming through Creepy Caves that are dark and twisted enough to get lost in, running Almost Out of Oxygen and nearly drowning, getting dangerously close to hungry Sea Monsters, and more. The game leans heavily on Survival Horror tropes without quite fully crossing the boundary into the genre. This makes for a tense experience with bouts of both terror and wonder. In short, it is a plot-heavy survival crafting game with added OMG.

A sequel titled Subnautica: Below Zero was released to Steam Early Access on the 30th of January 2019, set in an icy region of 4546B. Below Zero was later fully released on May 14, 2021.

open/close all folders
All Games
Subnautica
Subnautica: Below Zero

Until then... there's always the view.