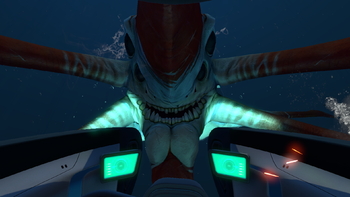 You know the phrase "Always a bigger fish"? That applies here too.
"Father was right. We should never have left this place. We shouldn't have gone so deep. They do not want us down there."
— Bart Torgal
Advertisement:

Subnautica may have its share of peaceful creatures, but the oceans are never safe, and neither are your dreams. Chances are, you'll need a new dive suit after escaping these - assuming you do.

Alterra would like to remind you personal injury insurance does not cover "Death by Unknown Lifeforms." Do not enter The Void at all costs. Have a good day.