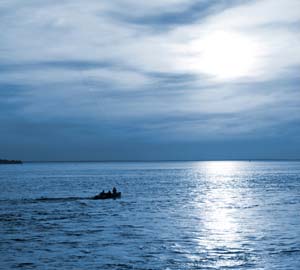 "How inappropriate to call this planet Earth when it is quite clearly Ocean."
— Arthur C. Clarke
Advertisement:

A sea story is a work in which the ocean is the primary setting.

Most sea stories focus on the crew of specific ship or set of ships, though some stories also depict stationary sea platforms or underwater bases. Setting a story at sea adds an element of the exotic and adventurous to a story. The enclosed setting of life aboard a ship also allows an author to portray a social world in miniature, with characters cut off from the outside world and forced to interact in cramped and stressful conditions. They will invariably include one or more Tropes at Sea. Subgenres include Wooden Ships and Iron Men, Pirate Stories, Ocean Punk and Sub Story, however many sea stories do not qualify as any of these subgenres. For even more examples see The Other Wiki here