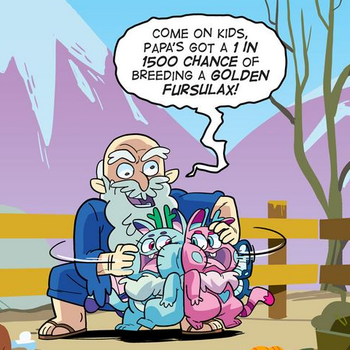 No one better tell him about the platinum ones...
Advertisement:

In a game in which friendly or tameable creatures play an important role, sometimes a player will find themselves needing more or better critters than what they can find naturally. Reasons for this could vary based on the goals of the game, but the solution to the problem is always the same: you breed the beasts you have in order to get your desired result. Some games may instead opt for a "fusion" system that causes the two parent creatures to disappear, but the idea behind it is very much the same.

In-game breeding systems involve putting two compatible creatures together in order to obtain offspring that take after one or both parents. An extremely basic system would result in offspring that look just like one of the parents. However, more complex systems can include multiple traits that can be bred for, complicated rules for inheritance, and perhaps even methods for producing Mix-and-Match Critters.

Although this trope can fit comfortably into many different genres, it is most often found in RPGs and simulation games. In the former, it often plays out as a sort of Lamarckian Min-Maxing, in which the player carefully picks breeding pairs, possibly over several generations, in order to obtain a highly optimized creature at the end. Simulation games are more likely to have highly complex breeding systems, to the point that Breeding Sim has become a recognizable subgenre in and of itself, usually found in the form of browser games.

Hot Skitty-on-Wailord Action is a separate trope, but overlap with this one is not uncommon. For tropes that may result from a breeding system, see Gender Equals Breed, Patchwork Kids, All Genes Are Codominant, Super Breeding Program and Hybrid Power. Fusion-based versions bear some relation to Item Crafting.