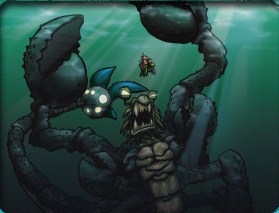 What's kraken?
"On a scale of one to ten, there is no number large enough."
— Flavor Text for Cawh (pictured), Magi-Nation
Advertisement:

These are the big ones. These are the sea monsters whose size not only matches ships but dwarfs them. When these are introduced, all you'll see is an overhead shot of a small boat on top of a much larger shadow in the water — and "small boat" ranges from fishing ship to aircraft carrier. These beasts aren't just big, they're leviathan.

They'll live in the deepest depths and their appearances are saved for the end of days when the world is to be shattered by their movements. If they're not Eldritch Abominations, they're the next best thing. There will be little shyness about their inspirations, they'll be unabashedly named after the Scandinavian legend of Kraken or the biblical Leviathan. The Kraken tends to take the form of a tentacle-laced Giant Squid or octopus, while the Leviathan is more variable, ranging from a colossal whale to a massive sea serpent. However, since Our Monsters Are Different, the title of kraken or leviathan may be given to all kinds of terrors of the deep. Lobsters occur with surprising regularity, for some reason.

The Leviathan in the Bible is often taken to be a view of a whale and is sometimes translated directly as whale. (Notably, the "big fish" that swallowed Jonah was often interpreted as a whale or leviathan but nowadays people are having a lot of fun with it as a Megalodon.) Indeed, the modern Hebrew word for whale is לויתן, or leviathan. Strangely, the actual biblical description of a leviathan

suggests that it has legs and is able to move on land, and seems to refer to armour plates or scales (in fact, if one ignores the Word of Dante and the fire-breathing, it sounds quite like a very large crocodile). In modern fiction, leviathans are typically interpreted as outsized sea dragons, Sea Serpents, giant fish or Monster Whales.

Kraken, on the other hand, are Tentacled Terrors believed to be inspired by giant squidnote although they are usually depicted as octopuses, and most early accounts were very sparse on their appearance and tended to focus on their resemblance to islands, and when most people think of a kraken, they tend to imagine a a squid-like creature that is simply many times bigger than a real one. However, since actual Nautical Folklore says that the Kraken could be mistaken for an entire chain of islands, one can reasonably infer that it was imagined to be much bigger than most film depictions.

Interestingly, a common theme in sea monster stories is of two contrasting sea beasts that are each other's mortal enemy, and sperm whales, the largest predatory whale and deepest diver, are believed to hunt giant squid.

In video games, Kraken often have Cognizant Limbs, with their tentacles being considered separate from the body as enemies. They usually reside in the Eldritch Ocean Abyss.

If you were looking for the book by China Miéville, see Kraken.