Useful Notes / The Moons of Saturn

"You're not gonna believe this, I went to Phoebe instead of Titan. It's like hello Saturn, after 10 moons it's time to stop naming and start numbering."
—Rick Sanchez 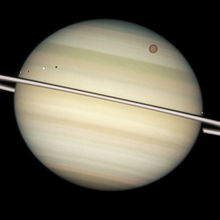 82 of these, 53 with official names. Technically the rings could be considered conglomerations of millions of moons, but there's only so much space on the Internet. They were originally all named after Titans of the Greek myths, (the Roman god Saturn being roughly equivalent to the Greek Kronos, king of the Titans)note The Roman mythology didn't focus as much on the doings of the gods as the Greeks did, and so the Roman story of the Titans and the Titanomachy was basically lifted wholesale from the Greeks, but Saturn was a preexisting figure in the mythology and seems to have fairly consistently been the father of Jupiter. but so many have been discovered that they ran out of Titans, and thus the outer "irregular" moons have been divided into the "Gallic", "Norse" and "Inuit" groups after the sources of their names.

Small moons that orbit near (or sometimes between) Saturn's various rings. They're also known as "shepherd moons" because they keep the particles that make up the rings in line. These moons are only a few kilometers in diameter, as this close to Saturn (i.e. within the Roche limit) anything larger would get slowly torn apart. Voyager and Cassini have taken pictures of the various kinks, twists and waves inflicted on the rings by their gravitational wakes.

Two of the largest of Saturn's inner moons, Janus and Epimetheus, are co-orbital. This means that when one of the moons catches up to the other, it gets sped up and the other slows down on their paths around Saturn. This is the only such configuration in the Solar System. 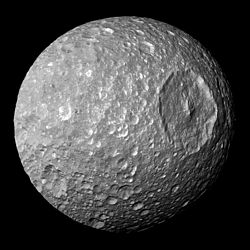 A small moon that got hit by a big rock at some point and just barely avoiding breaking up. This had led the moon to resemble the Death Star, with a 130-km crater named Herschel that almost exactly corresponds to the fictional space station's laser dish. note The Voyager probes discovered the crater three years after the original Star Wars was released, so whatever the faults of George Lucas are, plagiarism isn't one of them. At least, not this time. Mimas is also slightly egg-shaped, with the long end pointed toward Saturn. Bizarrely, a temperature map produced by NASA showed that the warmer regions of the moon looks like Pac-Man

Its surface features (apart from Herschel) are named after people and places from the legend of King Arthur (Avalon Chasma, the crater Galahad, etc.). 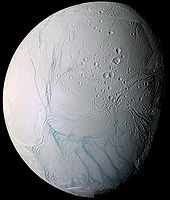 Just like the Jovian moon, Enceladus is suspected to hide an ocean of liquid water underneath its surface, due to water vapour eruptions from Enceladus's many cryovolcanic vents. This was confirmed in September 2015 when it was determined that Enceladus's surface was shifting significantly relative to its interior, and have concluded its hypothetical subsurface ocean is global. Cassini flew through and found evidence of complex organic molecules. That, in addition to the discovery that the Enceladan water is salty, makes it a possible marker for life. By virtue of being covered with ice, it is the most reflective object in the Solar System. Enceladus is smaller than Europa and has almost no surface gravity, which is why streams of water and steam bursting from cracks in the ice become long, impressive plumes.

Its surface features are named after people and places from the stories of the Arabian Nights (Baghdad Sulcus, the crater Sindbad, etc.). 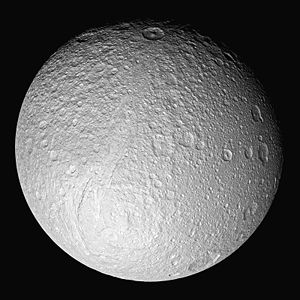 A mid-size moon marked by a very long (2000km), very wide (100km) and very deep (3-5km) canyon system, Ithaca Chasma. Some scientists theorized that Tethys used to have subsurface liquid water before it all froze solid, causing the surface to "crack".

Like Mimas, Tethys also has a very big crater called Odysseus, which is 400 km in diameter (or approximately 2/5 of Tethys'). It is much shallower than Mimas's Herschel though. Two smaller, irregular, "Trojan" moons, Telesto and Calypso, also share the same orbit around Saturn as Tethys. Also like Mimas, a thermal map of Tethys shows Pac-Man.

Its surface features are named after people and places from The Odyssey (the aforementioned Ithaca Chasma, the crater Telemachus, etc.).

Some... thing is wrong on Saturn 3note At least, in the novelization, it was Tethys. The script had it on Titan, but that's an ill fit these days..

A Cracking Good Time at Dione 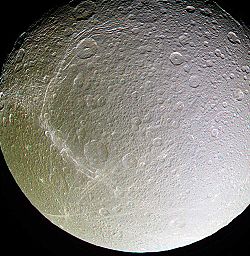 Another mid-size moon with surface features (cracks, troughs, smooth plains, rises and depressions) which seems to indicate past or present tectonic or volcanic activities. Pictures from the Voyager probes showed wispy white lines that were thought to be frost; Cassini proved them to be cliffs hundreds of meters high. Like Tethys, it also has orbit-mates, or Trojan moons — Helene and Polydeuces are irregular lumps of rock.

Its surface features are named after people and places from The Aeneid (Carthage Fossae, the crater Aeneas, etc.). 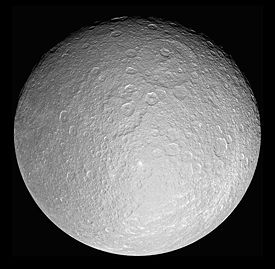 The second-largest Saturnian moon. Named after the Wife of Saturn in mythology. The most interesting surface feature of this otherwise heavily-cratered moon is... a large crater, called Tirawa, with bright rays radiating outwards. Perhaps to compensate for general boringness Rhea, like Saturn, may have a ring system (the only moon in the Solar System which would). The rings, however, would be very dark and very tenuous.

Its surface features are named after elements from non-European creation myths (the craters Izanagi and Izanami, Kunlun Linea, etc.).

Rhea has a thin atmosphere

. (And by "thin", we mean "more rarefied than a laboratory vacuum".)

Orange Haze All Up on Titan 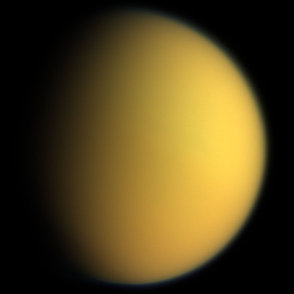 The second biggest moon in the Solar System (after Jupiter's Ganymede) note Before the era of space probes it was believed to be the biggest, since its high reflectivity gave a false impression of its size and comprising 96% of all mass in orbit around Saturn. Despite its size (larger than Mercury), it only has one-seventh the Earth's gravity and its bulk density is less than twice that of water — there's a lot of ice and rock mixed in.

It's covered in a thick hydrocarbon hazenote Here on Earth, we call it "smog", making it the only moon to have a full-blown atmosphere. It's also the only known celestial body in the Solar System, apart from Earth, to have both a solid surface and basins of liquid on it. Unlike Earth's oceans, the liquids in question are light hydrocarbons, mostly methane and ethane — basically the same stuff that the atmosphere is made of. note If oxygen comes into contact with the air on Titan, you won't have time to say, "Oh, the humanity!" as it ignites violently. As a bonus, Titan's equatorial regions are abundant in massive dunefields

, the largest of the Solar System, whose grains are thought to be made of organic compounds too, maybe with a core of water ice.

Due to its uniqueness, Titan occasionally appears in fiction

Cassini carried an atmospheric entry probe, Huygens (built and managed by the European Space Agency and named after the discoverer of this moon), along on its trip to the system. On its way there the mission control team realized the Doppler shift caused by the differing velocities of Cassini and Huygens would cause its radio signals to become unreadable. They changed Huygens' approach vector to reduce the shift, and the data and pictures were successfully transmitted as the probe parachuted east of the Adiri regionnote see Titan map with the probe's landing site marked here

. Unfortunately, half of them were never picked up because a programming error prevented Cassini from listening to one of the two data channels; nevertheless the pictures revealed a strangely Earth-like landscape of what looked like drainage channels, islands and seas (all produced by hydrocarbons). Pictures from the surface showed a gloomy, orange-tinted plain covered with "ice pebbles". The Huygens probe carried a the first ever microphone to record audio on a world other than Earth, and was the first probe to transmit audio recordings from another world in our Solar System. note the Phoenix Polar Lander on Mars carried a microphone, but it was never switched on. Before that, the Mars Polar Lander was fitted with a microphone but that probe failed to land.. This mission will be followed by NASA's Dragonfly

rotorcraft drone, expected to be launched if everything goes as planned next decade.

Similar to Venus, the thick haze layer on Titan renders any optical observation of its surface from orbit impossible, so outside of close-up images taken from the Huygens lander, the map of Titan was constructed using Cassini's radar imaging instrument. The actual surface wouldn't appear reddish-orange (that's due to its atmosphere), but rather a combination of whites, grays and the occasional black patches due to its mostly icy composition, similar to the other icy moons in the outer Solar System. 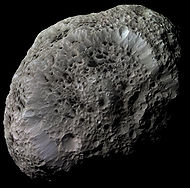 A small irregular moon (smaller than Mimas) shaped and colored like a sponge. Hyperion is notable for being the only moon in the solar system to have a "chaotic rotation"note At least until the New Horizons probe discovered the same happens with four of the five moons of Pluto, meaning it lacks poles (no, not the Central European kind, though it lacks those, toonote Even if Poland could into space, no human has gotten even remotely close to Saturn) or a stable axis of rotation. This essentially makes Hyperion's orientation in space unpredictable. A very hyperactive moon, indeed.

Its surface features are named after solar and lunar deities (e.g. the crater Helios).

Yin and Yang OR the Frosted Walnut: Iapetus 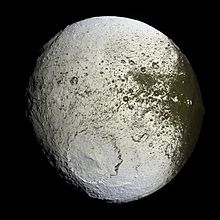 Famously very white on its trailing side and very black (i.e. as dark as coal) on its leading side, Iapetus was discovered by Giovanni Cassini in 1671. The moon is tidally locked. Its two-tone nature was a mystery until 2009, when the Spitzer Space Telescope discovered a very dim ring of dust generated by the outer moon Phoebe. Since Phoebe orbits Saturn in the opposite direction, as the "Phoebe ring" spreads out it smacks into Iapetus head-on and darkens that side. Cassini also discovered a gigantic equatorial ridge that some people have compared to plastic sprue or the surface of a walnut. Also, because it orbit at an incline relative to the plane of the rings (unlike all the other major moons), Iapetus is the only major moon of Saturn with a full view of the spectacular ring system. On the other moons, the rings appear at best as a thin line in the sky (at worst, you're on Titan and while you have some marvelous mountains and methane seas to look at, the sky is just a red-orange haze). But on Iapetus, the sky looks like this

◊. One imagines that if interplanetary space tourism ever becomes a thing, Iapetus, with its pretty mountains and view of Saturn, would become quite a popular destination.

Its surface features are named after people and places from The Song of Roland (Roncevaux Terra, the crater Ganelon, Toledo and Tortelosa Montes, etc.)

In the Empire from the Ashes series, the Achuultani attempt to hurl Iapetus at Earth as a weapon. 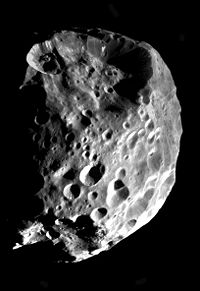 Phoebe was the first moon to be discovered photographically (in 1898) and was the outermost of Saturn's known moons until more were discovered in the 2000s (it's now considered a member of the "Norse group" of irregular satellites). Its main claim to fame is its retrograde orbit and very low albedo, and it was long thought to be a captured asteroid. Recent evidence points to it being a captured "centaur" (a Kuiper belt object pulled in from its normal stomping grounds out by Pluto by the permutations of the gas giants).

Its surface features are named after people and places from the Classical myth of Jason and the Argonauts (e.g. the crater Hylas).

Home of the protomolecule in The Expanse and its TV adaptation.