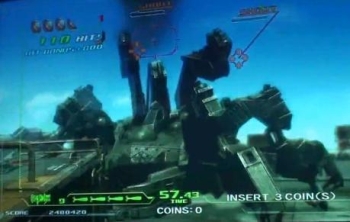 Razing Storm is a light gun rail shooter arcade game developed and published by Namco Bandai for the System 357note Namco's arcade board based on the PlayStation 3 board.

You play as two members of the special forces unit S.C.A.R., identified as Alpha One and Alpha Two, to assassinate terrorist leader Paolo Guerra. When the plan goes awry due to an anti-air attack, the unit must fight for the success of the mission. Most of the game primarily involves the use of a machine gun that is effective against soldiers and lightly armoured personnel. At certain points, you will fight against the terrorists' death machines. These include the fast but weak Mini-Mecha "Raptor", a Spider Tank, and Humongous Mecha known as "Kraken", forcing you to change weapons. Your mission is to eliminate the terrorist threat and destroy the enemy's headquarters, while battling the terrorists and their Humongous Mecha in the process.

As in Crisis Zone, the player is equipped with a handheld ballistic shield. When the shield is deployed, the player is impervious to all types of damage and ammunition, although he is unable to attack.

A compilation with the sequel to this game, titled Time Crisis: Razing Storm, was ported to PlayStation 3 under the new "Move" controls (which unfortunately turned the game into something akin to a First-Person Shooter). The arcade mode was also included and two other arcade shooters are packaged with it: Time Crisis 4 (the arcade mode only, not include the earlier FPS mode of the console version) and the moderate smash-hit Deadstorm Pirates (a pirate-themed shooter similar to Sega's Let's Go Jungle!/Let's Go Island).

In the sequel mode, the player controls Delta 1 and fights in battles before, during, and after the arcade version, eventually completing the ''sequelhook' rescue mission and battling the not-dead Paulo Guerra.