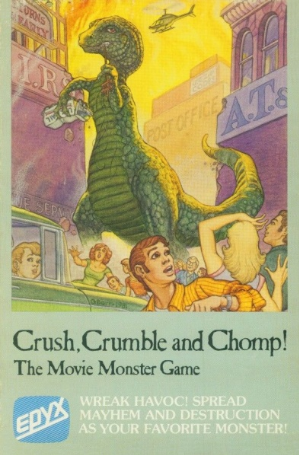 Crush, Crumble and Chomp! is a computer game from Epyx, published in 1981 for the Atari 8-Bit Computers, Apple ][, VIC-20, Commodore 64, and TRS-80. Subtitled "The Movie Monster Game", it's a lighthearted simulation/strategy game where the player controls a gigantic movie monster and attacks one of four major cities (New York City, San Francisco, Washington, D.C., and Tokyo).

Generally speaking, the player is scored based on how long they manage to survive, how much damage they cause, and how many human forces they eliminate. Play proceeds with a turn-based quasi-real-time system; the player's commands take a certain amount of time to execute, and longer commands may result in the human units making a move before the player. The monster must eat humans to stave off hunger and heal damage, though the player will eventually lose through attrition.

While the default game has six predefined monsters, the disc-based version has a "Grow your monster" option to let the player create their own critter.

Epyx released a Spiritual Successor, The Movie Monster Game, in 1986, but only for the Apple ][ and Commodore 64. This game had a similar "Monster vs. City" theme, and even featured an officially-licensed Godzilla as a playable monster. Both games have gotten a modern Spiritual Successor in Kaiju-A-GoGo.