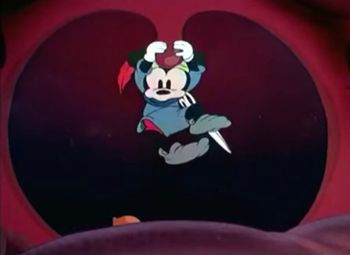 So our hero finds themselves against a notably-sized obstacle. It could be the Monster of the Week that's twice the size of them. It could be an Attack of the 50-Foot Whatever if it's on a grand scale. The hero could even be the Incredible Shrinking Man. Whatever the situation, the hero is vulnerable either to being Eaten Alive or unwittingly committing Orifice Invasion.

With that, the hero must react quickly to avoid being Swallowed Whole. But, wait! What's that, hanging down at the back of the throat? The hero has the option to pull off one last act of defiance in order to force their predator to spit them back out. They can either treat the uvula like their own personal punching bag, or they can grab hold of it and hold on for dear life.

Either way, taking advantage of the uvula's sensitivity is enough to force the would-be consumer to cough or spit (or, in rare cases, sneeze) their unwitting prey to safety. If the swallowing creature is a whale, the hero will likely be Blown Upward by a Blowhole.

Not to be confused with Attack the Mouth, where the hero directly intends to strike their target's mouth as a direct action, rather than a reaction.