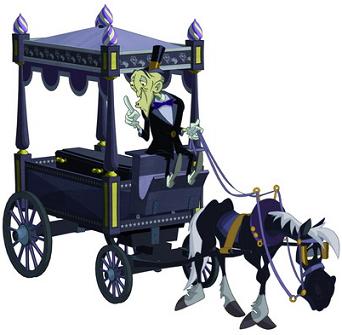 A stock character in The Western. This is the guy who will take a tape measure to you in the street, right before your big gunfight. He'd be fairly nondescript, if it weren't for that morbid cheerfulness with which he goes about his business.

Usually he's got a somber air befitting a man of his line of work. That doesn't stop him from occasionally showing a grim smile and sharing a bit of dark humor with those he considers the Soon-To-Be-Deceased. In the West, death is a part of life and the Undertaker may have a variety of coffins and "last suit you'll ever wear"s in stock. The scary "keep off the grass" Undertaker is used mainly in children's dramas where sneaking into the graveyard at night is required. Often a part of his creepiness is that he is overdressed, meticulously formal and too clean. Unless of course he does more with the bodies than just take them to be buried, in which case he may overlap with the Mad Scientist and have a similarly unkempt appearance.

Keep in mind that most of these interactions will be with The Hero alone as most of the townsfolk have learned to avoid him.

Occasionally though, both he and the town doctor will rush out side by side after a gun fight since neither of them can load up the loser alone.

The origin of this trope is murky, but some have suggested that it originated during the bubonic plague of the Middle Ages. The undertaker became someone to be feared, because if he had been called it usually meant there was plague in your neighborhood and everyone you knew was likely to die. Some people even thought the undertakers caused the plague, so it wasn't uncommon for them to be killed by their fearful neighbors. The prevalence of corrupt undertakers who would sell dead bodies to physicians (highly illegal in most of Europe and the Middle East at the time) certainly didn't help.

Compare The Coroner and Creepy Mortician. If you're looking for the wrestler, see The Undertaker.