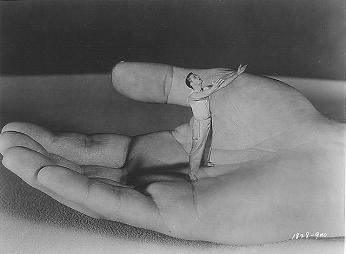 "To God there is no zero. I still exist!"
Waldorf: Aww, a great little actress.
Statler: Yep, and getting smaller all the time!
Both: Do-ho-ho-ho-hoh!
—The Muppet Show, featuring Brooke Shields in Alice in Wonderland

Bees and moths whirr above you like helicopters. Flowers and blades of grass loom over you. Familiar household objects are like huge, immovable obstacles. Your fellow human beings blot out the sky with their immense, towering girth. Sound like a bad case of the Mondays? Think again: you've been shrunk!

The plots of Shrinking Man stories tend to involve hapless victims of Applied Phlebotinum suddenly becoming one finger tall (Magic Pants included), struggling to navigate a formerly friendly environment (such as a house or yard) and spending the rest of the episode trying not to get killed or eaten while attracting the notice of normal-sized folks who might be able to change them back to normal. (Don't expect the message to get across immediately.)

As it generally violates the Square-Cube Law, this is usually an example of Rule of Cool.

A subset of Shapeshifting. Often times this is how the human protagonists are introduced to (and/or imprisoned in) the Mouse World.

If the characters are shrunk down far enough, they could embark on a "Fantastic Voyage" Plot.

Depending on how the shrinking works, they may or may not get their clothes to shrink with them—resulting in Shapeshifting Excludes Clothing if the audience or characters are a party to the change, or Empty Piles of Clothing if they are not.

See also Sizeshifter. Contrast with Attack of the 50-Foot Whatever. See also Shrink Ray. For characters who are naturally small, see Lilliputians.

Kamek shrinks Mario during their battle.

Kamek shrinks Mario during their battle.