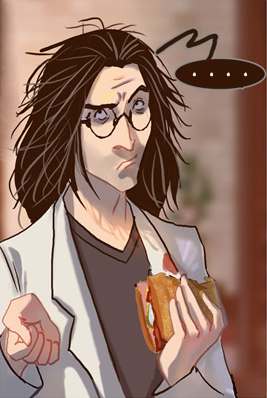 What was this image from again?
"The Shee were a race unique in their mindset, most likely having invented the steam engine as an offshoot of an attempt to design a better way of brewing tea before they invented the wheel."
— Creatures
Advertisement:

(For the Disney movies, see The Absent-Minded Professor — the "The" before the title is important.)

This Stock Character is a brilliant scientist, but, uh, very flighty, often forgetting things like the date, people's names, meetings, eating, sleeping, people's names, etc. His mind tends to run a mile a minute, he can often struggle to hold a normal conversation, and it's typical for him to become so engrossed in his work that he loses track of just about everything else. Good thing he (and it's very often a he) is good at what he does and often has perfect memory for scientific details or mathematical values. With a little prodding from the heroes to focus on the matter at hand, he rarely fails to create the tools necessary to save the day.

A subtrope of The Professor. And some sort of genius, what was it?— TV Genius, that was it.

Compare Mad Scientist and Mad Mathematician who may exhibit this trait, demonstrating that even their vast intellect has limits. For those whose absent-minded brilliance shines in engineering and applied science, compare Bungling Inventor. One with an extreme case of this may resemble an Idiot Savant. And then there are those who are Brilliant, but Lazy, a Ditzy Genius, or a Genius Ditz. May end up being a Stupid Scientist. This teacher is highly likely to be More than Just a Teacher.

Now if you'll excuse me, I must nip on home, as I seem to have forgotten to put on my pants. Ah, the hair? Oh, yes, I should try to comb it some time... I do have a comb, don't I? A Subtrope of... oh, yes, Forgetful Jones. Compare with Attention Deficit... Ooh, Shiny!.

He goes to a shop to try to buy something but forgets what he came to buy. After accidentally sitting in glue while searching in an attempt to remember what he wanted to buy and then becoming stuck to a chair, he finally remembers that he came to the shop to buy... a chair.

...What am I doing here again?