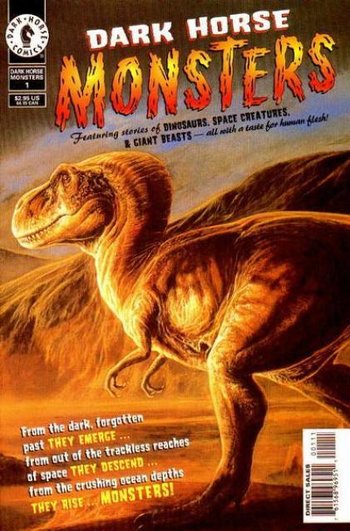 "From the dark forgotten past they emerge... from the trackless reaches of space they descend... from the crushing ocean depths they rise... monsters!"
— Cover Blurb
Advertisement:

Dark Horse Monsters is a 1997 Anthology Comic published by Dark Horse Comics. It's Exactly What It Says on the Tin: a comic containing a group of short horror stories (similar to Tales from the Crypt or Creepshow). It featured cover art by Bob Eggleton (from his painting "Encounter with Horns and Teeth"). Although listed as "1," it only lasted one issue, and the stories contained in it were reprints of previously published stories which had appeared in issues #33 and #47 of Dark Horse Presents.

Tropes used in this comic: