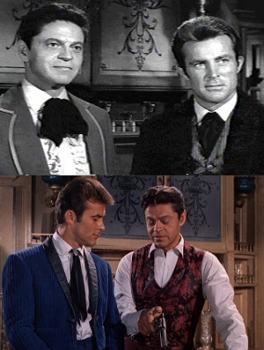 In black and white (season one only) and living color.
Advertisement:

The Wild Wild West is a 1965-1969 CBS TV series that combined two then-popular genres: The Western and Spy Fiction, following the anachronistic adventures of two Secret Service agents roaming the western United States during the Ulysses S. Grant administration. James West (Robert Conrad) was a borderline Ace, the ladykilling man of action, while his partner Artemus Gordon (Ross Martin) was a Gadgeteer Genius and Master of Disguise (full list here

). Based on his work in this series, Martin the actor easily qualifies as a Real Life example of the latter.

The duo battled a wild assortment of mad scientists and criminal masterminds, their most persistent foe being the Evil Genius dwarf Dr. Miguelito Loveless (Michael Dunn). Depending on how exacting a person's definition of Steampunk is, this series could be said to be the highest-profile example of the genre ever to appear on American live-action TV. More assuredly, it is the Ur-Example of Cattle Punk.

Following the show's cancellation, two reunion movies were produced in the early 1980s. In 1999, Wild Wild West, a big-budgeted feature film starring Will Smith as West and Kevin Kline as Gordon, was released.

In 2010 CBS announced plans for a revival series, to be helmed by Ronald Moore (Star Trek, Battlestar Galactica) and Naren Shankar (CSI), but it never made it out of Development Hell.

The series now has a recap page.