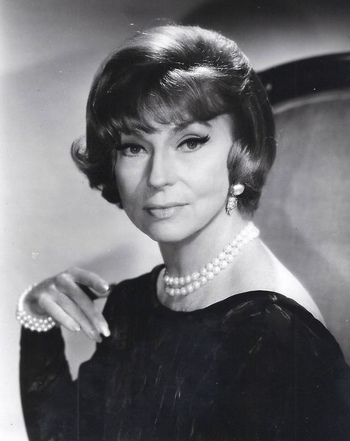 Agnes Robertson Moorehead (December 6, 1900 – April 30, 1974) was an American actress best known for her role as Endora on Bewitched. However, her six-decade career also included work in radio, stage, and film.

She was part of Orson Welles' Mercury Theater troupe and as such made her film debut in Citizen Kane, which was also the film debut for Welles and most of his cast. She also appeared in Welles' second film, The Magnificent Ambersons. She went on to enjoy a thriving career as a character actress that included parts in All That Heaven Allows, Show Boat, and Hush... Hush, Sweet Charlotte. On television, besides being a regular on Bewitched, she also appeared in "The Invaders", one of the most famous episodes of The Twilight Zone.

Moorehead died in 1974 of uterine cancer, just two years after her most famous role on Bewitched had ended. She is one of a disproportionately large number of cast and crew on the film The Conqueror to have died of cancer. She married twice, both marriages ending in divorce, and had no children. Although she was rumoured to be a lesbian both during her lifetime and in the years since, most of those close to her deny that she was.note Her Bewitched co-star Paul Lynde reportedly outed her, though Lynde was a well-known gadfly who never let the truth get in the way of a good story. She was survived by her mother Mary, who lived to the ripe old age of 106.