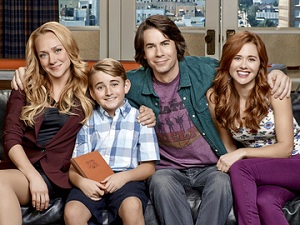 (From left to right) Wilma, Wendell, Vinnie, and Taryn
Advertisement:

Wendell & Vinnie is a comedy airing on Nickelodeon, created by Jay Kogen. The two co-stars are Vinnie (Jerry Trainor), an immature, womanizing Adult Child who is appointed the guardian of Wendell; a 12-year old Heartwarming Orphan who is, conveniently, a Child Prodigy (in whatever subject is useful to the episode). The very first episode is literally Vinnie being investigated by Child Services after Wendell breaks his arm and almost dies from an allergic reaction. ...Yeah, he'll be okay.

The series was cancelled in the summer of 2013, quietly ending its run while its time slot was taken over by shows more recognizable as Nickelodeon's traditional programming (namely The Haunted Hathaways and The Thundermans).