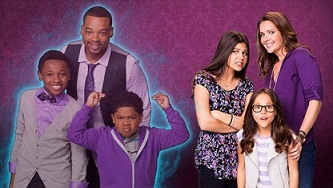 Life in the Big Easy gets a little more complicated and way more spirited when the Hathaway siblings move into a house full of ghosts.

"The Haunted Hathaways" centers on a single mother named Michelle Hathaway (Ginifer King) and her two daughters Taylor and Frankie, (Amber Montana, Breanna Yde) ages 14 and 9 respectively. After Michelle goes through a divorce, she moves her family from New York City to New Orleans and opens a bakery, only to discover a family of three already living in the house that they move into. Single father Ray Preston (Chico Benymon) and his two sons Miles and Louie (Curtis Harris, "Lil’ P-Nut" Flores), ages 13 and 9 respectively, are very proud of this home because it is where the boys were born and where they have spent their entire lives and afterlives! Yes, the Prestons are ghosts, and together with the Hathaways become The Brady Bunch with a supernatural twist.

It now crosses over with the network sister show The Thundermans and lasted for two seasons until it was canceled in late 2014, ending its run in March 2015. Benjamin "Lil’ P-Nut" Flores eventually moved on to star in Game Shakers after that, with Brianna Yde starring on The Loud House and School of Rock.