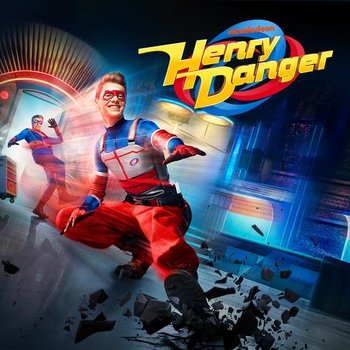 Fighting crime for $9 an hour. Feels goooood!
It all just kinda happened. I wanted an after-school job, but then, an indestructible superhero hired me to be his sidekick.
Now we blow bubbles...and fight crime. Feels good!
— Opening Narration
Advertisement:

The series focuses on Henry Hart (Jace Norman), a boy who lives in Swellview, a small town that is no stranger to dangerous supervillain activity that is thankfully always stopped by the heroic yet bumbling Captain Man (Cooper Barnes). One day, Henry manages to get an after-school job at an old pawn shop only to discover that this oft-ignored store is actually a front for the secret lair of the superhero, with his new boss Ray Manchester being said hero. Promising to pledge secrecy to all of this information, Henry gets superpowers of his own and becomes Captain Man's new sidekick, Kid Danger. Coming along for the ride are Henry's best friends Charlotte (Riele Downs), who immediately figures out what's going on, and Jasper (Sean Ryan Fox), who remains blissfully unaware until the season two finale, as well as Captain Man's best friend Schwoz (Michael D. Cohen), who built the secret lair. Eventually, Henry's sister, Piper (Ella Anderson) who spent five seasons unaware of her brother's identity joins the fray after seeing him transform right in front of her.

Henry Danger takes place within the Nick Verse, having had crossovers with The Thundermans, Game Shakers, and Knight Squad. Notably, this is the first show Dan Schneider has produced since All That that doesn't feature a returning actor from one of his previous productions. After Schneider's departure from Nickelodeon in 2018, Henry Danger continued under co-producers Christopher J. Nowak and Jake Farrow, who had previously collaborated with Schneider on his three previous series, iCarly, Victorious, and Sam & Cat.

On August 31, 2019, Jace Norman confirmed the show's fifth season will be its last. Production officially wrapped on November 23 of that year. The final episodes

began airing in January 2020, with the Grand Finale arc airing from Feburary 29 until March 21 of that year.

A short-lived animated Spin-Off, The Adventures of Kid Danger, premiered on January 15, 2018 and ended June 14 the same year. A film adaptation of the show is currently in development for release on Paramount+. Another spinoff, Danger Force, premiered on March 28, one week after the mothership's finale.

Not to be confused with Henry Darger.

Mr. Wallaby, the supposedly nice children's show host, turns out to be the alter ego of Mr. Nice Guy, the man in an emoji mask punishing citizens for breaking Mr. Wallaby's "Golden Rules".

Mr. Wallaby, the supposedly nice children's show host, turns out to be the alter ego of Mr. Nice Guy, the man in an emoji mask punishing citizens for breaking Mr. Wallaby's "Golden Rules".