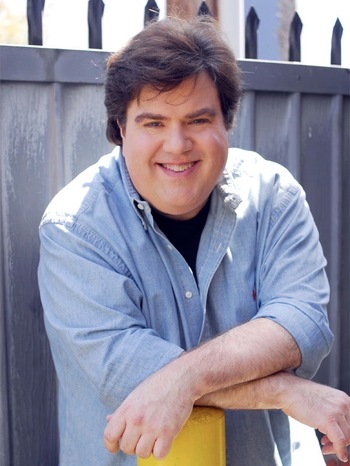 The king of kids' comedy at the Turn of the Millennium.

Daniel James Schneider (born January 14, 1966) is an American actor, writer and producer born in Memphis, Tennessee. He's probably best known to adults as Dennis Blunden on the 80s ABC sitcom Head of the Class. But to millions of children (and kids-at-heart), he is the creator, writer and producer of several of the most well-known and loved Kid Coms. His work portfolio is primarily composed of Nickelodeon's premier shows (and vice-versa: his shows make up a very large chunk of Nickelodeon's live-action programming).

His production company is called Schneider's Bakery and he loves to put various Easter Eggs among his various shows, ie. a Schneider's Bakery can be seen in the stock location footage of the movie theatre in Drake & Josh His shows tend to use a similar way of talking, a variation on Buffy Speak by finding obscure, unusual or sometimes made-up words to use.

He can be considered Nick's sitcom equivalent to comic playwright Neil Simon, of The Odd Couple (which Schneider's show Drake & Josh bears similarities to) fame.

On March 26, 2018, Nickelodeon and Schneider mutually decided to end their 24-year relationship after the network did an investigation and found that many of his co-workers felt he was overly aggressive, demanding or verbally abusive

as a show runner.

Note: A pilot for a Gibby Spin-Off from iCarly was filmed, but not picked up.

His personal blog can be found here.

See also the Nick Verse, a Shared Universe between various Nickelodeon live-action KidCom series — it's also known as the "Schneiderverse" as so far all of the shows in it are his.

, whose website Cosmoetica is also subtitled the "Schneiderverse of Schneider Verse."