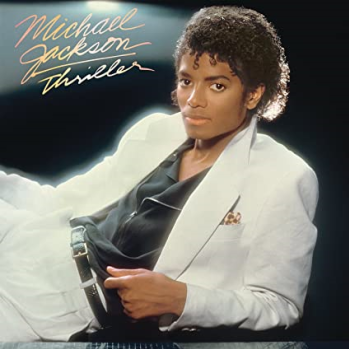 Thriller is the sixth studio album recorded by Michael Jackson. It was released through Epic Records on November 30, 1982.

Continuing his collaboration with Quincy Jones, it went on to become the best-selling music album in history, selling over 34 million copies domestically and over 65 million copies worldwide; there's probably a copy of it nearby your house. Seven of the nine tracks on the album were released as singles, with each one reaching the Top 10 on the Billboard Hot 100. Three of the singles—"Billie Jean", "Beat It" and "Thriller"—were accompanied by music videos that elevated the record to its iconic status—and, by extension, defined the art of the music video medium itself.

Officially, this album is the only original album certified by the RIAA as triple-Diamond (more exactly, 34-times Platinum), with four singles listed as multi-Platinum. The album also went 13-times Platinum in the United Kingdom, earning Michael more worldwide certifications from one album and its singles than almost any other musician gets in their entire careers.

Although Jackson was already world-famous since the 1970s, and music videos already existed as a promotional tool, both he and the medium became a dominating force in the music industry. He broke down racial barriers via his MTV appearances, won eight Grammys including the 1984 Album of the Year and even met then-US President Ronald Reagan at the White House. Since 2007 "Thriller" has been included in the Library of Congress' National Recording Registry of "historically, culturally and aesthetically significant recordings". In 2009, the iconic music video in which Jackson dances with zombies was included in the National Film Preservation Board's National Film Registry for the same reasons.

The album was re-issued in a 25th anniversary edition, Thriller 25, on February 11, 2008. It added five remixes and one new song, "For All Time". A deluxe edition included a second disc with various interviews and an instrumental version of the Title Track, as well as a DVD with the music videos from the album.

I said, "you wanna be tropin' somethin':"