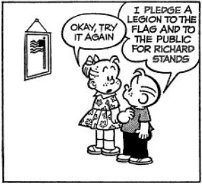 "...one naked, undergarment, invisible man, with Liberace and puffed rice for all."Actual pledge I pledge allegiance to the flag of the United States of America, and to the republic for which it stands, one nation under God, indivisible, with liberty and justice for all.
"I mean, what the crap was [Homestar] even saying there? 'Everybody, now bleed a beetle'? No! Ewww. 'Everybody, law deed will be dull'? Uhhhh, no kidding. 'Everybody, something the feed mill'?"
— Strong Bad commenting

Mondegreens are the phenomenon of mishearing lines, normally song lyrics, but poetry is also a frequent victim. Sometimes it's lack of correct enunciation, sometimes it's the speed or pitch that a lyric is delivered at, but often, a song lyric or recited poem will become famous not for what it says, but for what it sounds like it says to the uncareful ear.

Sometimes this is caused by bad diction, or bizarre lyrics. For a more in-depth look at the history of mondegreens and how they're used in various media, please see the Analysis Page.

The term was coined by Sylvia Wright, who wrote a 1954 essay about how as a child she had misheard a line from a Scottish ballad — "They hae slain the Earl o' Moray, and Lady Mondegreen." It wasn't until she was grown that she learned the line was in fact, "...and laid him on the green."

A Gag Sub for a music video will probably be filled with mondegreens (and mostly works best if original and sub language are different ...unless the language is homophone-rich).

Can lead to Innocent Swearing if an innocent word is misheard as a profane one. Contrast Malaproper, which is a character who mixes up words on a regular basis, and Beam Me Up, Scotty!, which is for when the misheard line becomes more famous than the original. See also Lady Mondegreen, which is about something similar happening with character names in other works; Something Something Leonard Bernstein, where people understand part of the song but struggle to make up actual words from the rest; Rouge Angles of Satin, which is when the words are all technically real words, just not the correct ones; Viewer Name Confusion, which is when the audience gets a character's name wrong, and Gosh Dang It to Heck!, when made-up words are used to sound like profane words.

Note: Examples below should be In-Universe, or ones referenced in other works only. Do NOT add examples of this trope to YMMV pages. Limit any Real Life examples to the Quotes page.

Compare those to what Jessie and James say:
"To protect the world from devastation!
To unite all peoples within our nation!
To denounce the evils of truth and love!
To extend our reach to the stars above!"

Olive the Other Reindeer

A famous misheard lyric in "Rudolph the Red-Nosed Reindeer" which plays a part in this movie.

Olive the Other Reindeer

A famous misheard lyric in "Rudolph the Red-Nosed Reindeer" which plays a part in this movie.