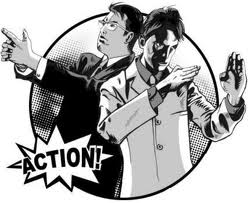 "We can't be silent
Cause they might be giants
And what're we gonna do, unless they are?"
— "They Might Be Giants", Flood
Advertisement:

They Might Be Giants is a band founded in 1982 by John Linnell and John Flansburgh. They initially became famous as a part of a wave of Alternative Rock bands to find success between the 1988 creation of Billboard's Modern Rock Tracks chart and the Grunge explosion of 1991–92; other like-minded bands that became successful during this time include The Pixies, XTC, Midnight Oil and The Church.

The band is named for the 1971 film starring George C. Scott as a judge who thinks he's Sherlock Holmes, and Joanne Woodward as his psychiatrist, a doctor whose name happens to be Watson. The name of that film is a reference to Don Quixote (that's why he attacked the windmills, you know)... which was itself a sideways reference to The Bible.

They often perform songs attributed to animated projects, or other forms of television entertainment. They sing the theme songs to Malcolm in the Middle, Mickey Mouse Clubhousenote as well as the "infamous" Hot Dog Dance and Higglytown Heroes, and wrote Dr. Evil's theme in Austin Powers: The Spy Who Shagged Me (In the Style of... Shirley Bassey). Some older readers may remember the videos made for two songs from their 1990 album Flood, "Particle Man" and their cover of The Four Lads' song "Istanbul (Not Constantinople)", on Tiny Toon Adventures. Others might remember their late '90s Shout-Out to the cartoon Courage the Cowardly Dog, which, along with several of their other music videos, would later appear on KaBlam!. They also worked with the creators of Homestar Runner, resulting in an official music video for "Experimental Film" starring the H*R cast, as well as some jam sessions with the Homestar puppet. Their cover of "Dog on Fire" (originally performed by their friend, Hüsker Dü guitarist Bob Mould) was the theme song of The Daily Show with Jon Stewart.

The Coraline movie was initially meant to be a musical featuring TMBG songs specially written for it; the only ones released so far, "Careful What You Pack" and "The Other Father's Song" (which made it into the movie), could be seen as an indicator of What Could Have Been. Although The Other Father's singing voice is performed by John Linnell, he is otherwise voiced by TMBG frequent collaborator John Hodgman.

The band's 1987 music video for their single "Don't Let's Start" was the first ever video by a band on an independent label (Bar/None Records) to go into regular rotation on MTV outside of its alternative block ''120 Minutes'' (which was only created the previous year).

In 2004, they started the Venue Songs project, whereby they would go on tour and write a new song for every venue they played. Venue Songs was released as a CD/DVD combo, the DVD consisting of videos to the songs, with host segments featuring John Hodgman as The Deranged Millionaire, a mysterious figure who had set the band with this challenge. If they failed, they would be forced to give up their magical songwriting talisman forever, leaving Brooklyn vulnerable to attack from The Deranged Millionaire's roving baseball gangs and monstrous creatures. Luckily, they won, and the Millionaire was therefore indebted to do an interview in one of their podcasts. It's one of the funniest things ever recorded.

And the old man whose face you see in all their videos is named William Allen White. He was a famous journalist in Kansas from The Edwardian Era to World War II. The band were secretive of this for quite some time in case his surviving relatives were to sue them.

Tropes that got their names from TMBG:

Tropes and other entries associated with the band include:

At the end of each episode of Mickey Mouse Clubhouse, the team will do the Hot Dog Dance.

At the end of each episode of Mickey Mouse Clubhouse, the team will do the Hot Dog Dance.