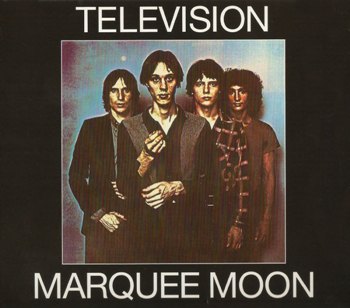 Marquee Moon is the 1977 debut album from New York City-based new wave/punk band Television. Though guitarist/vocalist Tom Verlaine claims to have written the songs intending to make a pop album - "a bunch of cool singles" - Marquee Moon gives Verlaine and Richard Lloyd plenty of space for extended solos and riffing, ending up as a Post-Punk take on a Grateful Dead jam-fest.

Marquee Moon was a massive critical favorite, finishing in third in the Village Voice's 1977 Pazz & Jop poll behind Never Mind the Bollocks, Here's the Sex Pistols and Elvis Costello's My Aim Is True. Strong reviews and a successful tour alongside Blondie made a hit of the album across the pond, but stateside things went differently as a tour alongside Progressive Rock stalwart Peter Gabriel had the band well out of its element, gathering very little steam before Elektra Records pulled support.

Although sales have never caught up to its reputation, Marquee Moon remains an acknowledged classic and a major influence on Alternative Rock guitar, cited by figures like The Edge, John Frusciante and Michael Stipe.