Help Yourself in the Future 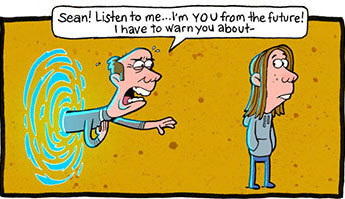 Kevyn Andreyasn: Hey, when you want something done right, do it yourself.
Captain Kevyn Andreyasn: And if that's not enough, go back in time and tell yourself to try it again.
— Schlock Mercenary
Advertisement:

Bob is sent to the future or past to help "someone important". When he arrives there, he finds that the person he has to help is him. After all, who else could Bob trust?

The type of 'help' given varies. It may be a rescue, it may be assisting in a battle, it may just be going back in time to tell yourself "Do NOT drink the punch!" This often plays out in reverse too, the hero is helped by an Anonymous Benefactor who he or she later realizes was (or will be, or had been — gah!) themselves all along.

Note that saving your own life, or basically doing anything that enables you to travel in the first place, causes an ontological paradox.

Contrast Never the Selves Shall Meet. Compare Retroactive Preparation. Depending on whether or not it's a Bad Future, related to Future Me Scares Me. If while helping yourself, you get a little too friendly with yourself you may end up Screwing Yourself. Compare My Own Grampa. In that trope, you help your present self (in that you preserve your existence) by doin' the nasty in the past-y.

Alternative Title(s): Help Yourself In The Past