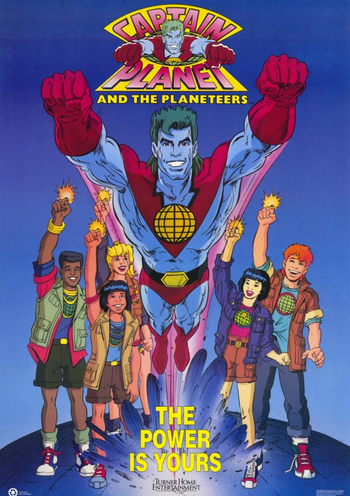 Captain Planet and the Planeteers (1990 to 1996) underwent several small revisions over the course of its run — it was renamed The New Adventures of Captain Planet during its 1993 to 1996 run, which coincided with a change in production companies (from DiC to Turner-owned Hanna-Barbera) — but the tone of the show always focused on the environment, often with An Aesop about the environmentnote though other topics like violence or AIDS received their Aesops as well near the close of each episode. Prevalent in the show's theme was the concept of personal responsibility: Captain Planet's Catchphrase was "The power is yours!"

The villains — who all had Obviously Evil names like Duke Nukem (not that one), Hoggish Greedly, and Looten Plunder — were strawmen who often seemed to want to destroy the planet just because it was the evil thing to do, as well as profit. This was a sincere, if exceptionally hamfisted, way of avoiding offense: if the villains had been given grayer morality, then kids might have compared them to their parents or their parents' employers, who are only trying to do their jobs in an efficient manner. To avoid friction, the writers created villains who were intentionally exaggerated and made to represent the planet's environmental problemsnote Dr. Blight = unethical scientific research; Duke Nukem = irresponsible use of nuclear power and radiation; Hoggish Greedly = overconsumption; Looten Plunder = corporate greed; The Slaughters = animal poaching; Sly Sludge = waste production; Verminous Skumm = disease and urban decay; Zarm = hatred and war rather than the actions of individuals.