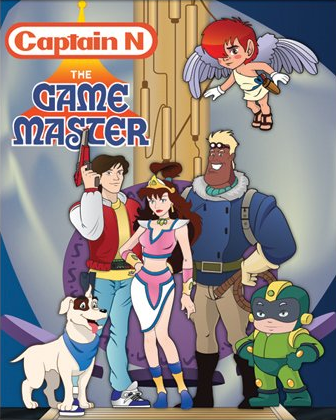 From left to right: Duke the Dog, Kevin (a.k.a. Captain N), Princess Lana, Simon Belmont, and Mega Man, with Kid Icarus above. Just so that you'd know.
When my father disappeared, and Mother Brain tried to take over Videoland, our only hope lay in an ancient prophecy that a great warrior from another world would come to our rescue. I admit, I was a bit skeptical when Kevin showed up, but now I don't know how we'd ever get along without him!
— Princess Lana in the opening Season 2
Advertisement:

Captain N: The Game Master is an Animated Series on NBC based on the popular NES games that weren't Super Mario Bros. It is about the story of Kevin Keene, a teenager who loves playing video games so much that one day he and his dog, Duke, are sucked into the TV and they enter a strange dimension called Videoland.

Once there, Kevin learns that he is to fulfill a prophecy as "Captain N", a savior sent to save Videoland from the evil Forces of Chaos, led by the Audrey II-esque Mother Brain (the main villain from Metroid voiced by Four Tops singer Levi Stubbs, who'd played Audrey II in the movie of Little Shop). Joining him are Videoland's sovereign Princess Lana, Mega Man, Kid Icarus, Simon Belmont from Castlevania, and later Game Boy. Kevin/Captain N and the gang would defend Videoland from Mother Brain and her henchmen, who included King Hippo from Punch-Out!! and the Eggplant Wizard from Kid Icarus. Other frequently recurring villains include Dr. Wiley of Mega Man, the Count from Castlevania, and a King Kong-like Donkey Kong.

Many of the characters were nothing like their original counterparts. It was also notable for adding Link and Zelda from the The Legend of Zelda cartoon series as recurring cast members following the cancellation of the Super Mario Bros. Super Show. It lasted for three seasons and was Screwed by the Network due to NBC's departure from the Saturday Morning Cartoon genre, and its time slot was replaced by local news after the Saturday morning block was shut down.

Captain N also received a Comic-Book Adaptation through the Nintendo Comics System. Due to only featuring first-party Nintendo characters, Mega Man and Simon Belmont were dropped from the main cast and replaced with Samus Aran, who is much closer to her videogame counterpart than most of the characters in the TV series.

Kevin: Life just isn't as cool without my Power Pad and Zapper!
Feedback